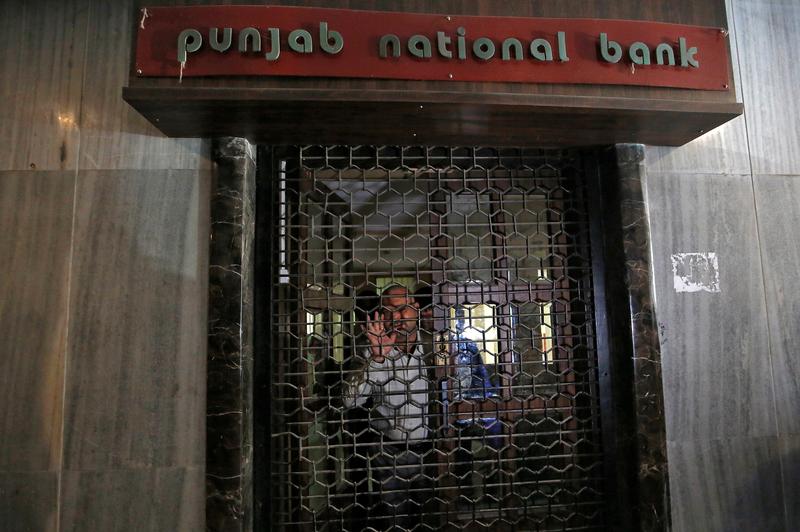 A new bankruptcy code tackles a class of large shareholders by transferring power from tycoons to creditors. Government ownership, however, remains troubling, evidenced by the metastasizing $1.8 bln Punjab scandal. New Delhi’s interference is the other 50 pct to address now.

A Central Bureau of Investigation (CBI) official looks out from a closed door of a Punjab National Bank branch in Mumbai, India, February 19, 2018. REUTERS/Francis Mascarenhas - RC1942B1AF60

India Finance Minister Arun Jaitley on Feb. 21 decried "a lack of ethics" among sections of the country's business community and criticised inadequate oversight by auditors and regulators following a $1.8 billion fraud at a state-controlled bank.

Jaitley did not refer by name to Punjab National Bank, where junior employees allegedly helped firms obtain unauthorised credit from overseas branches of mostly Indian lenders, but he repeatedly referred to "a stray incident."

He said the country needs to examine "the lack of ethics that a section of Indian business follows", adding that internal and external auditors should examine whether they had "looked the other way or failed to detect" any wrongdoing. Jaitley also said "the supervisory agencies" needed to "introspect”.

Firms involved in the fraud are allegedly linked to billionaire jeweler Nirav Modi and extended family members. A lawyer for Modi has denied the accusations.

PNB shares have fallen around 30 percent to 118 rupees since the bank disclosed the fraud on Feb. 14, putting the bank's market value at about $4.4 billion.