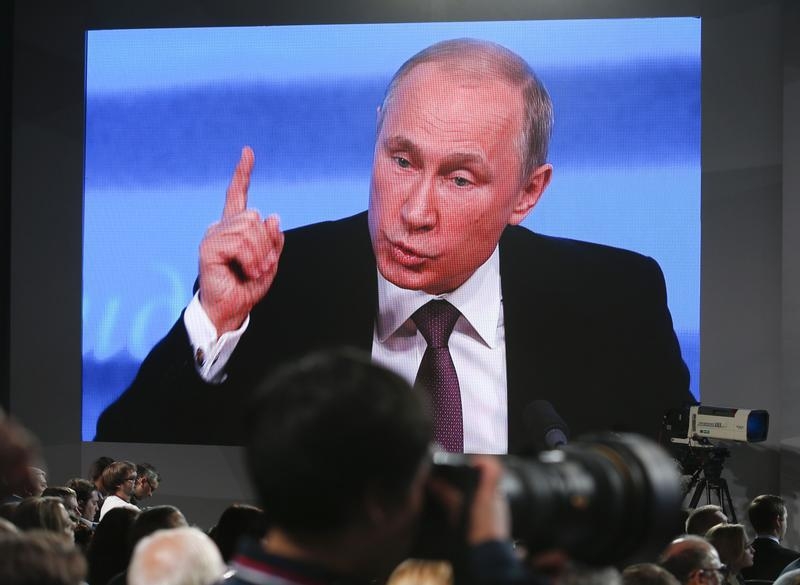 In the annals of foolish quotes, Vladimir Putin’s “a positive turn is inevitable” is bound to rank as high as “prosperity is just around the corner” – the probably apocryphal statement of U.S. President Herbert Hoover on the eve of the Great Depression. In a much-anticipated news conference, the Russian president shrugged off concerns about his country’s economy, and didn’t seem to have a plan to deal with the blows inflicted on Russia by Western sanctions and weak oil prices. In a nutshell, all his countrymen have to do is tough it out over the next two years.

Putin’s statement came the week the rouble dropped 23 percent in two days, laughing off a failed central bank attempt to stem the fall with a brutal interest rate hike. The currency is back to where it was late last week – meaning down 43 percent this year – the only difference being that the central bank is a few billion dollars poorer, and the economy hit with a 17 percent interest rate.

The Russian president repeated the Kremlin line of recent weeks – that the country has the resources to endure for another two years. That seems to be based on a rough comparison between the central bank’s official foreign reserves – a little over $400 billion – and the $140 billion of foreign debt Russian companies and banks have to pay back by mid 2016 – which they cannot refinance, due to Western sanctions.

Things are more complicated. Not all the reserves are simply at the government’s disposal to bailout ailing companies. And Russia’s main problem is not its foreign debt but the parlous fundamentals of its economy. On this, Putin didn’t give any sign that he had grasped the problem. He simply reiterated the usual promises to fight corruption, and his sincere wish the economy would one day become less dependent on oil.

The bold investors who might still be interested in taking a look at Russia will secretly hope that the man who spoke on Dec. 18 was just putting on an act, and that he has a secret master plan to deal with Russia’s economic debacle. Because the alternative – that self-denial rules at the top – is much too hard to consider.

Russian President Vladimir Putin is seen on a screen during his annual end-of-year news conference in Moscow December 18, 2014.

President Vladimir Putin assured Russians on Dec. 18 that the economy would rebound after the rouble’s dramatic slide this year but offered no remedy for a deepening financial crisis.

In an assured performance at a three-hour news conference, Putin blamed the economic problems on external factors and said the crisis over Ukraine was caused by the West, which he accused of building a “virtual” Berlin Wall to contain Russia.

The rouble has fallen about 45 percent against the dollar this year, and suffered particularly steep falls on Dec. 15 and Dec. 16, but Putin said its eventual rise was inevitable and avoided using the word “crisis.”