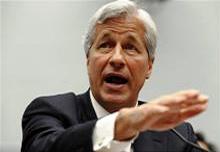 The Pyrrhic victory Tuesday for Jamie Dimon is a defeat for governance. Just over two-thirds of JPMorgan shareholders voted to keep him as both chairman and chief executive at the bank’s annual meeting in Tampa on Tuesday. And Dimon and the board had to devote a considerable amount of time to preserving his titles rather than running America’s largest bank by assets. The episode perfectly illustrates the common sense behind separating the two roles.

Having a third of shareholders vote against Dimon is hardly an overwhelming vote of confidence. It is, though, a marked improvement from last year when 40 percent of shareholders voted for a split just weeks after the bank announced what turned into a $6 billion hit to revenue from the so-called London Whale trading fiasco.

The support comes after the directors lobbied hard – and very late in the day – to keep Dimon at the helm of both the management team and the board. They had even gone so far as to warn that a change in leadership would be disruptive to the bank, unsubtly implying that Dimon might leave if he didn’t get his way.

There are more pressing concerns for the bank, from preventing similar losses to mending fences with regulators. Having the entire board be independent would make it a more credible check on the boss and help ensure the quest for profits doesn’t expose the bank and its shareholders to unnecessary risk.

Instead, the board’s presiding director, Lee Raymond, told shareholders at the meeting that what counts is how directors handled the crisis last year – in other words, admitting that he sees his role as purely reactionary. That should be a worrying signal to the bank’s owners.

At least some changes to the board’s risk committee look likely. Raymond hinted as much. Three directors – David Cote, James Crown and Ellen Futter – each won less than 60 percent of the vote for re-election.

If they are rotated out of the risk committee, or even leave the board, it will at least mark a small victory. But for Dimon, shareholders chose fear and personality over good corporate governance. That’s a big disappointment.

At JPMorgan Chase’s annual meeting on May 21, shareholders voted in favor of Jamie Dimon’s retaining the chairman and chief executive titles despite calls from influential shareholder proxy firms Glass Lewis and Institutional Shareholder Investors to split the roles. Only 32 percent of shareholders voted in favor of a split. That’s down from 40 percent in 2012.
Shareholders also voted in support of the bank’s board of directors, though only 53.1 percent cast their vote in favor of Ellen Futter, the President of the American Museum of Natural History. James Crown received 57.4 percent and David Cote 59.3 percent.
Dimon has been under fire since the bank disclosed a $6 billion trading loss in 2012 that the executive initially described as a “tempest in a teapot.”