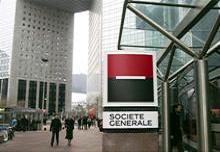 Qatar has given Societe Generale an honorable exit from Egypt. State-backed Qatar National Bank will buy the French bank’s 77 percent stake in its Egyptian unit, National Societe Generale Bank (NSGB), through a mandatory tender offer valuing the whole at $2.6 billion. The valuation of 2 times book value is lower than pre-revolution multiples, and SocGen will have to carry some currency risk. But with few-sizeable buyers willing to live with Arab spring volatility, it makes sense for SocGen to shrink while it can.

The French group has had to swallow a post-revolution discount to end any lingering concerns about its capital ratios. Prior to the uprising, NSGB traded at almost three times book. The central bank’s long freeze on new licenses, combined with the growth potential of a country with a population of 80 million and banking penetration of just 10 percent, means Egyptian banks enjoy higher valuations than in other emerging markets: Turkey’s Denizbank sold for just 1.3 times book earlier this year.

The valuation also reflects the currency risk facing both buyer and seller. Though QNB’s bid is denominated in dollars, it will be converted into the equivalent per-share value in Egyptian pounds when the offer is formally launched. SocGen will then be exposed to currency fluctuations until the offer closes a month later. The Egyptian pound is expected to devalue by 10 percent against the dollar within the next year, having already weakened by more than 5 percent in the two years since the uprising. Limited liquidity in the foreign exchange market could make it tricky to hedge the risk.

Qatar has a higher tolerance for Middle East risk than its Western counterparts and the emirate is close to Egypt’s new Islamist leaders. Indeed, the deal is further evidence of how the Arab spring has provided QNB with an opportunity to take a big step toward fulfilling its long-term goal to become an “iconic” brand and, implicitly, the biggest bank in the Middle East and North Africa. With a market capitalization of $25 billion, QNB recently invested in Libya and Iraq and remains keen on Turkey and Morocco as it diversifies from its slowing domestic market. SocGen’s honourable retreat is Qatar’s gain.

Qatar National Bank (QNB) has agreed to buy Societe Generale’s 77 percent stake in its Egyptian unit as part of a mandatory tender offer valuing the whole bank at $2.56 billion.
The sale values SocGen’s stake in National Societe Generale Bank (NSGB) at $1.98 billion. The price is equivalent to a valuation of 2 times NSGB’s book value on September 30, 2012 and a 10 percent discount to the market value prior to the announcement.
The French bank said it will book a net gain of around 350 million euros from the deal, adding an estimated 30 basis points to its Basel III Core Tier 1 capital ratio.
SocGen will sell its stake to QNB through a mandatory tender offer to all shareholders after obtaining necessary regulatory approvals. The deal is expected to close in the first half of 2013.
The $2.56 billion offer will be converted into Egyptian pounds at the time of the filing of the mandatory tender offer. The offer will then be expected to close after 30 to 45 days, during which period SocGen will be exposed to fluctuations in the Egyptian pound.
NSGB is Egypt’s second largest private, non-state-owned bank. QNB is 50 percent-owned by the Qatar Investment Authority, the country’s sovereign wealth fund.
JP Morgan and QNB Capital advised SocGen on the transaction. SocGen was advised by Morgan Stanley.