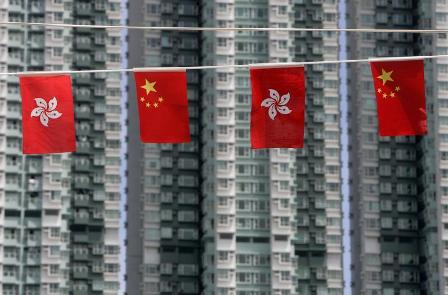 Here’s a radical career choice for investment bankers: become a Chinese citizen. American-born Marshall Nicholson has swapped his U.S. citizenship for a Hong Kong passport. Though the move is largely for family reasons, it will also go down well with clients on the mainland. For Western financiers seeking a local edge, it’s the ultimate display of commitment.

Nicholson joins a small but select group – including Tina Turner and Eduardo Saverin – who have taken the irreversible step of returning their U.S. passports. While the pop diva chose Switzerland and the Facebook founder moved to Singapore, Nicholson has opted for Hong Kong. It’s hardly an impulse decision: he has lived in the region for 11 years and has a Chinese wife. As a managing director of China International Capital Corp, he’s also one of a handful of Westerners working for a Chinese investment bank.

The number of people turning their backs on the United States remains small: last year, just 933 gave up their status as citizens or long-term residents, according to a list published by the Federal government, down from 1,780 in 2011. By comparison, the United States welcomed close to 700,000 new citizens in 2011, including more than 30,000 former Chinese nationals.

For the departing few, tax is a factor. Switching passports is the only way to escape the U.S. fiscal net – though only after a lengthy process that includes a one-off tax on assets. Career considerations weigh too. The global financial crisis diminished the previous appeal of investment bankers trained in the West. Moreover ,foreign financiers in Hong Kong are often suspected of regarding their stay as a staging post before returning to London or New York. What better way to demonstrate long-term staying power with potential clients than flashing a local passport?

Of course, investment bankers are only as good as their advice. And local citizenship doesn’t guarantee better treatment in China – or elsewhere. But in an industry suffering from overcapacity and intense competition, playing the China card may just make all the difference.

Marshall Nicholson, a managing director of China International Capital Corp, has renounced his U.S. citizenship and become a Chinese national. Nicholson announced the switch in an email to friends and colleagues.
“I am happily married to a Chinese woman for almost 10 years, worked for Chinese investment banks for 6 years, helped over 125+ clients (and growing) from Asia including China successfully raise capital and lastly, made Hong Kong, China my home,” he wrote.
Nicholson joined CICC last year after spending five years at Bank of China International Group’s investment banking arm. He previously worked for Macquarie, Merrill Lynch and JPMorgan.
A total of 933 people gave up their U.S. citizenships in 2012, according to a list of names published by the U.S. Federal Register, down from 1,780 in 2011.
The number of Chinese nationals taking U.S. citizenship totaled 32,864 in 2011, according to the U.S. State Department, equivalent to almost 5 percent of the total for that year.
(Research by Robyn Mak)