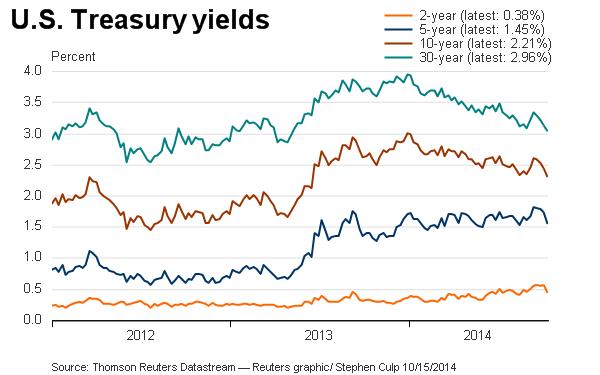 Suddenly, fear has overwhelmed greed. Yields on 10-year U.S. Treasury bonds slumped below 1.9 percent at one stage on Wednesday, and the 2 percent slide in the S&P 500 Index erased what remained of this year’s gains, although the index ended the trading day down just under 1 percent. It all augurs poorly for the expected end next month of the Federal Reserve bond-buying program. Yet the domestic economy has been steadily improving. Slowing growth elsewhere presents the bigger worry.

One sign of that broad concern is tumbling oil prices, to well below $90 a barrel, a downward trend echoed in the prices of other commodities. That in turn reflects expectations of softening demand growth in big economies like China’s. Low inflation – potentially going lower still – in Europe is another symptom of relatively sluggish growth in many parts of the world. The decline in U.S. producer prices reported on Wednesday played a role in the selloff, as may have the frenzy surrounding two U.S. cases of Ebola.

All the same, America’s economy isn’t doing badly. Second-quarter GDP growth rebounded to an annualized 4.6 percent, and the IMF last week actually upgraded its forecast for U.S. economic expansion to 2.2 percent in 2014 and 3.1 percent in 2015. Worldwide growth expectations, however, were downgraded to 3.5 percent in the second half of this year and 3.8 percent next.

The United States is part of the global economy, of course, but the Fed, whose policy-setting committee is due to meet in a couple of weeks, has a mandate to keep domestic inflation in check and employment as full as possible. There’s no sign of building inflation so the central bank has, in theory, room to delay any action to tighten conditions. Futures markets are now pricing in interest-rate increases later than previously anticipated.

With U.S. unemployment dropping to 5.9 percent in September, however, it wouldn’t be an easy sell for the Fed to revert to the stimulus of purchasing more bonds. Officials may worry that the slide in stocks and other asset prices, along with the associated spike in volatility, will undermine their prior efforts. And a slowdown elsewhere could prove contagious in the United States. On the other hand, skittish investors can flee risk swiftly. The Fed has to play a longer game.

Yields on 10-year Treasury notes slumped below 1.9 percent early in the day before settling at around 2.1 percent.

The Federal Reserve’s penultimate monetary policy meeting for 2014 is scheduled for Oct. 28-29. Following recent meetings, the U.S. central bank’s policy committee has reduced its bond-buying program in $10 billion-a-month increments to a run-rate of $15 billion a month, and in September the committee indicated it planned to end purchases after the October meeting.