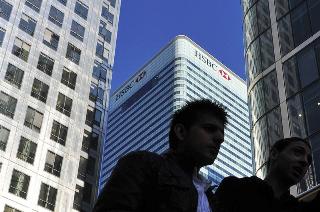 HSBC’s $1.9 billion fine for money-laundering is a record for a bank, but its one-off nature means that it’s largely symbolic for an institution with a market cap of 118 billion pounds. The outcome could have been worse. Some U.S. regulators wanted to indict the UK lender, according to a New York Times report, but they backed down on fears that a heavy-handed approach could destroy HSBC’s U.S. arm and destabilise the wider banking system.

Prosecutors at the U.S. Justice Department were considering three options for HSBC and in the end chose the least punitive, according to the report. Of the two tougher calls, a money-laundering indictment would have spelt the end of the bank’s U.S. business, forcing it to withdraw its banking charter; a lesser guilty plea to violations of the federal Bank Secrecy Act would have left HSBC facing restrictions on the scope of its operations as a minimum. Both could have triggered a negative impact on the economy that authorities were keen to avoid.

Of course, the wide-ranging steps that HSBC has taken to overhaul its business in the wake of the alleged money-laundering may also have swayed prosecutors’ opinion. But the consideration given to the prospect of systemic risk shows how little has been done since the beginning of the financial crisis to force banks to plan for orderly resolution, in spite of pledges to the contrary.

True, a joint paper on how to deal with failing banks published on Dec. 10 was welcome evidence of joined-up thinking between the U.S. Federal Deposit Insurance Corporation (FDIC) and the Bank of England – but the details were scarcely fleshed out. Meanwhile, other contradictory moves by regulators do little to help: German, UK and U.S. watchdogs are angling for banks to set up separately capitalised subsidiaries, in order to keep cash from leeching abroad.

As it is, HSBC is one of the globally systemic banks that would be one of the easiest to break up: its overseas entities are separately capitalised to a greater degree than most peers’. Yet regulators chose to leave its U.S. business largely unchanged – even though they have another five years during which they can indict the bank if it fails to stick to its side of the bargain. In the meantime, the record-breaking fine is yet another sign that, four years after the collapse of Lehman Brothers, finance is far from fixed.

The HSBC headquarters building is seen in the Canary Wharf financial district, in east London March 7, 2011.

HSBC Holdings Plc agreed on Dec. 11 to pay $1.92 billion to settle a multi-year U.S. criminal probe into money-laundering lapses at the British lender, the largest penalty ever paid by a bank.
In a statement, HSBC Chief Executive Stuart Gulliver said: “We accept responsibility for our past mistakes. We have said we are profoundly sorry for them, and we do so again.”
No bank or bank executives have been indicted as prosecutors have used deferred prosecutions. The deferred prosecution agreement, due to be revealed by U.S. Justice Department officials later on Dec. 11, could yield new information about a failure at HSBC to police transactions linked to Mexico, sources familiar with the matter told Reuters.
The case suggests financial institutions are too large and interconnected to indict, according to the New York Times, which reported on Dec. 11 that authorities ruled out a criminal indictment against HSBC because they felt it would trigger the bank’s failure and so hurt the economy.
Shares in HSBC were barely lower by 0945 GMT. Shares eased 0.3 percent to 639 pence on news of the size of the fine, which had been flagged a week before.