This is not a bailout 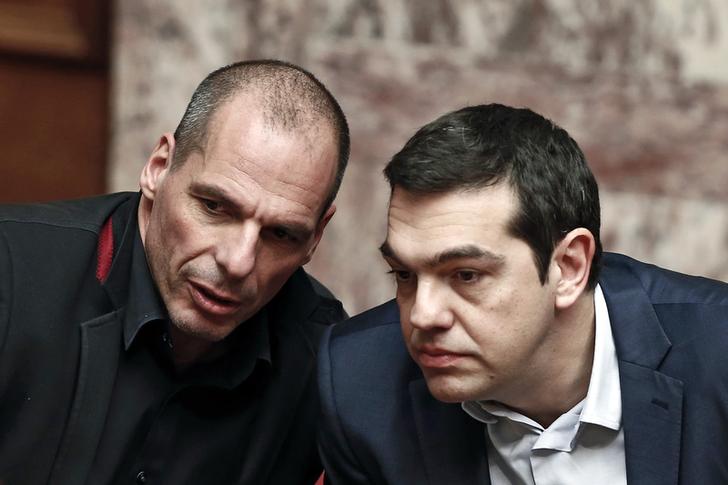 The reforms agreed by Athens are both ambitious and fuzzy. They tick some of the favoured boxes of hawks in Germany and elsewhere. But Syriza’s election pledges are in tatters. Europe may be better off – but the domestic situation in Greece has become more volatile.

Greek Prime Minister Alexis Tsipras (R) and Finance Minister Yanis Varoufakis talk during the first round of a presidential vote at the Greek parliament in Athens, February 18, 2015.

Greece submitted a reform agenda to euro zone finance ministers on Feb. 23, a move needed to secure backing for an interim extension of the country’s previous bailout and release of funds by the end of April.

The agenda includes measures to reform tax policy, public spending, pensions and labour markets, according to a copy of the agenda obtained by Reuters. The government committed not to roll back “privatisations that have been completed,” and to “achieve EU best practice” in labour market legislation, the document said. It pledged that increases in the minimum wage would happen “in a manner that safeguards competitiveness and employment prospects.”

Mario Draghi, president of the European Central Bank said that the document was a “valid starting point” for a successful conclusion of the review of Greece’s bailout, but noted that the reforms “differ from existing programme commitments in a number of areas,” according to a letter sent to Jeroen Dijsselbloem, head of the Eurogroup of euro zone finance ministers. “We will have to assess during the review whether measures which are not accepted by the authorities are replaced with measures of equal or better quality in terms of achieving the objectives of the programme,” Draghi wrote.