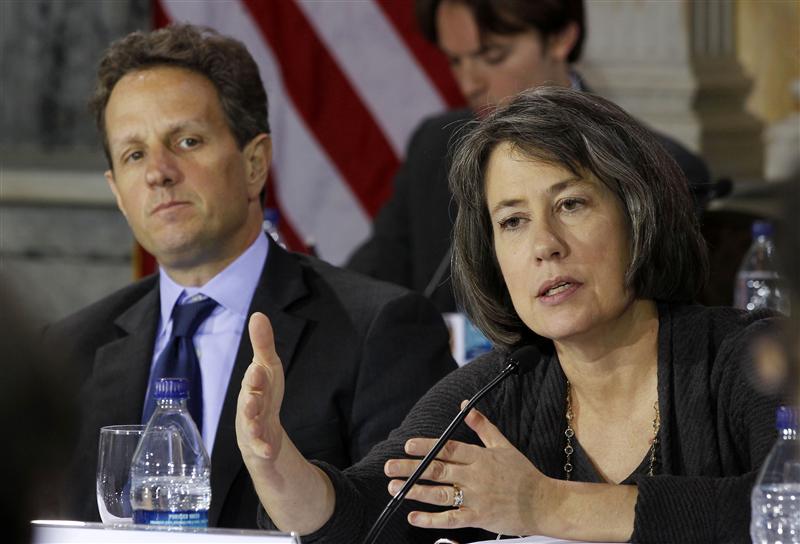 Get ready for round two of the “Bair versus Geithner” sparring match. Sheila Bair may no longer run the FDIC, but she has formed an independent group to push forward reforms in the U.S. financial system. The primary pressure point will be the council of regulators led by Treasury Secretary Timothy Geithner. While the two have tangled before, their interests are now aligned.

Bair’s Systemic Risk Council, a sort of Justice League of once-superstar watchdogs, wants to ensure financial reforms introduced as part of the Dodd-Frank Act will actually get implemented. The bipartisan group includes former heads of nearly every major regulator, along with economists, bankers, and retired senators.

Some of its goals are fairly uncontroversial. The body wants the Office of Financial Research to beef up its data collection and analytics system and for global regulators to share data. But others aren’t so simple. For instance, the group is calling for a quick resolution of the complex Volcker Rule, the new bank capital framework and derivatives market reforms.

The Systemic Risk Council holds the Financial Stability Oversight Council, the prudential oversight body consisting of head federal regulators, responsible for delays in making this happen. According to Bair, the council, or FSOC, hasn’t exhibited the leadership needed to get things done. Geithner sits at the head of its table, making him Bair’s implicit target.

Bair, a Republican appointee, and Democrat Geithner have clashed before. During the 2008 crisis, then-New York Fed President Geithner wanted regulators to use whatever means necessary to stabilize the system. To protect the FDIC’s insurance fund, Bair fought against bailouts she considered too lenient. She was also instrumental in helping Wells Fargo take over Wachovia, scuppering a previously agreed deal with Citigroup that Geithner helped engineer.

In the present situation, Bair and Geithner should have common cause: to finalize financial reforms. That doesn’t mean there won’t be friction. As Bair surely appreciates, in the face of bureaucratic inertia and intense external lobbying these things are easier said than done. But at least until Geithner steps down at the end of the year, the match-up offers a more constructive replay of some of the more tense moments of the crisis.