As bad as it gets 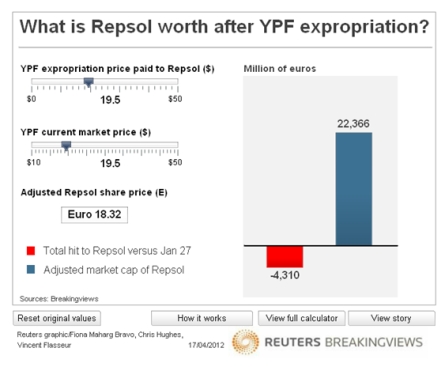 How bad could it get for Repsol in Argentina? The Spanish oil and gas company has just had the bulk of its 57 percent stake in YPF expropriated by Buenos Aires. It’s far from clear whether Repsol will be properly compensated. Which way it goes could make big difference to its market value.

Repsol says YPF is worth at least $18.3 billion, based on a simple formula enshrined in YPF’s bylaws. On this assessment, if a third party buys more than 15 percent of the company, it must launch an offer for the rest of the shares that values YPF using the highest price-earnings ratio attained in the previous two years, multiplied by earnings in the last 12 months. YPF then would be worth $46.55 a share, more than double the current quote of $19.50.

But it’s pretty unlikely Repsol will get as much. The price at which it is compensated will be decided by a government tribunal in Argentina. If Buenos Aires ends up paying the current (depressed) market price, the hit to Repsol would be 3.1 billion euros relative to values at Jan. 27 before talk of expropriation began. Subtract this from Repsol’s market value before Argentina began its saber rattling in January, and Repsol should be worth around 19 euros a share.

But that’s not all. Repsol sold a 25 percent stake in YPF in two blocks to the Petersen Group, an Argentine vehicle owned by the Eskenazi family. As part of the sale, it loaned the group 1.54 billion euros, backed by YPF shares. The rest was loaned by a syndicate of banks that have priority over Repsol’s vendor loan. The Petersen Group relies on dividends from YPF to service the loans, and a default cannot be ruled out. Assuming this happens, and Repsol receives shares which it can then sell at market prices, the hit to Repsol would be another 813 million euros.

In the worst case scenario, where Repsol gets zero compensation and the Petersen Group defaults on its loan, Repsol’s shares would be worth only 15.88 euros, assuming all other things were equal. With Repsol trading at 16.20 euros, investors are practically discounting that already. But Repsol must now go back to the drawing board, with a new strategic plan due next May. Without YPF’s dividends, future cash payouts are at risk. More than two-fifths of Repsol’s value would be tied up in downstream, according to Collins Stewart estimates, a sector that trades on lower multiples. It would take a brave investor to buy now.