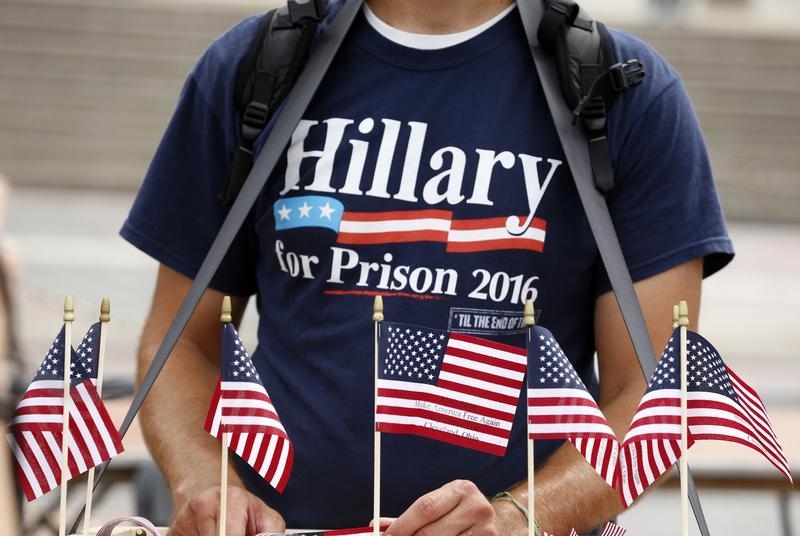 The Republican National Convention’s “Make America Work Again” day was devoted almost entirely to keeping one woman – Hillary Clinton – from getting a job. Though voters may prefer Donald Trump on economic matters, the paucity of detailed discussion of how to recharge growth and generally ameliorate the American condition, as he promises, suggests the presumptive GOP nominee is struggling on substance.

Since kicking off their confab in Cleveland on Monday, Republicans have barraged the party faithful with vitriol over Clinton’s personal-email fiasco, the ransacking of a diplomatic outpost in Libya during her time as secretary of state and a general lack of trustworthiness in her and her husband, Bill, the former president. New Jersey Governor Chris Christie conducted a mock prosecutorial takedown of Clinton during his headliner address on Tuesday.

Delegates chanted “lock her up” and “Hillary for Prison” T-shirts are widely available for sale in downtown Cleveland. In an analysis of Tuesday’s speeches, statistician Nate Silver totted up 157 mentions of “Hillary” and “Clinton” and just 37 uses of the word “work.”

This isn’t surprising given how much more difficult a target the economy makes. GDP growth isn’t particularly robust, at around 2 percent. And there are plenty of important asterisks attached to the country’s 4.9 percent unemployment rate: Sluggish wage growth, workers moving to less-lucrative service jobs and millions giving up looking for work. Compared to Europe, Japan and parts of the emerging world, however, America is in ruddy health.

Convention host Ohio provides a case in point. The Buckeye State’s jobless rate has hovered around 5 percent this year, compared to 11 percent in late 2009. Indeed, it was one of Republican Governor John Kasich’s selling points in his unsuccessful presidential campaign. Tellingly, Kasich is not scheduled to appear at the convention.

Economic cheerleaders for Trump are sparse on the event schedule and in the halls of the Quicken Loans arena. At a Politico event, two of his top advisers suggested they were working on a plan to boost growth by 4 percent, but conceded it’s a work in a progress. The economy is “finally what folks in the campaign are looking at,” economist Larry Kudlow said when pressed on the absence of a detailed plan. That’s good because they haven’t found much so far.

In a headline speech, Christie listed a series of Clinton policies, actions in office and personal issues, asking after each in prosecutorial fashion if she was "guilty or not guilty."  The second day of the four-day convention was billed by the Republican organizers as "Make America Work Again" day.