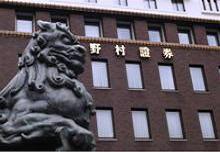 The Abenomics-inspired rally has fizzled, knocking the Japanese bank’s domestic business. But its investment banking arms in the United States and Europe are beginning to carry their weight. With healthy capital and a less hostile regulator, Nomura can continue to hold its own.

The headquarters of Nomura Securities is pictured in Tokyo October 27 2012. REUTERS/Toru Hanai

For the March quarter, pretax profit was 88.6 billion yen, down 48 percent on the first three months of the previous year, but up slightly quarter-on-quarter.

Pretax profit in retail was 23.3 billion yen in the quarter, down 59 percent year-on-year and 51 percent on the three months to December.

In wholesale, however, pretax profit was 33.5 billion yen, up 20 percent quarter-on-quarter and down just 6 percent on the same period a year ago.

At the end of March, Nomura’s Tier 1 capital ratio was 13.3 percent. Fully adjusted for the introduction of Basel III, its capital ratio would be 12.2 percent.

The bank declared a year-end dividend of nine yen per share, taking its annual dividend to 17 yen per share. It also plans to buy back up to 100 million shares to return capital to shareholders.

Nomura’s announcement came after the close of trading in Tokyo. Nomura shares closed at 588 yen, down 2.7 percent.