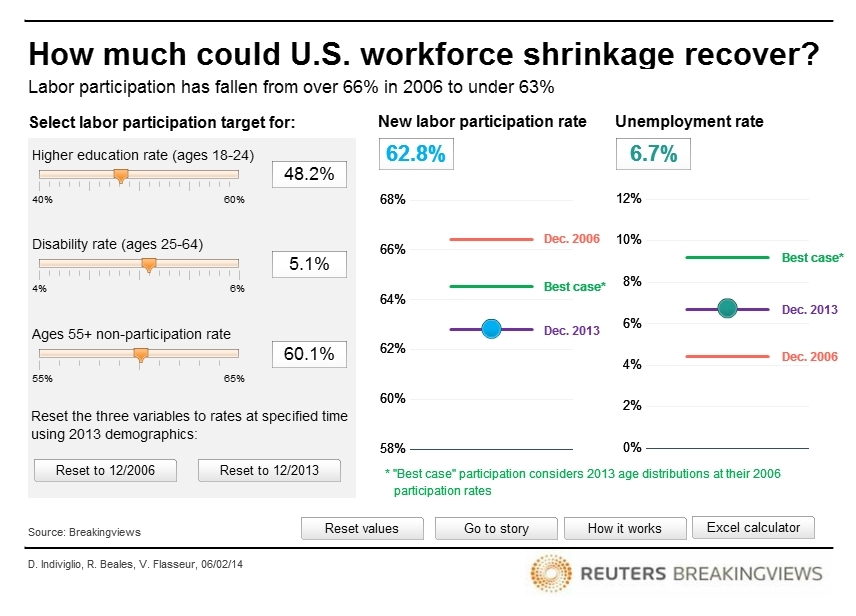 The recent decline in the U.S. jobless rate to 6.7 percent is flattered by low labor participation. A return to the 2006 level of workforce involvement would mean 8 million more job-seekers and unemployment running over 11 percent. But as a Breakingviews calculator shows, that dramatically overstates the scale of the problem.

Concerns over reduced participation in the workforce and the implications for long-term unemployment provide plenty of fodder for political finger-pointing. The headline figure – the proportion of Americans in work or seeking it – has fallen from 66 percent before the 2008 financial crisis to an alarming-looking 62.8 percent in December, according to the Bureau of Labor Statistics.

The real picture is less dire. For one thing, the increased proportion of 18- to 24-year-olds in higher education, using Census Bureau numbers, has reduced workforce participation. Most politicians and economists would not want that rolled back. Even if it were, to the 2006 rate of about 44 percent rather than today’s 48 percent, it wouldn’t have the impact of eight years ago because the aging population means this cohort is less significant. Today, it would add about 1.3 million to the pool of would-be workers.

The increase in the proportion of 25- to 64-year-olds on disability benefits has also reduced the participation rate. There might be greater eagerness to see that reversed, from the current 5 percent or so to nearer 4 percent. That would mean another 1.5 million job-seekers.

Meanwhile, though, the Baby Boomer generation has been working harder in retirement than the historical norm. Wind the clock back and the labor participation rate would decline – and because of the increased size of the 55-and-over group, more so than would have been the case in 2006. Make all three adjustments, and today’s participation rate would rise only to 63.5 percent. If no more jobs could be found, that would mean an unemployment rate of 7.7 percent.

One way the unemployment rate could turn out worse is if, as seems plausible, retirees continue to want to work more rather than less. At least that would increase the overall rate of labor participation. Whatever the causes, reduced participation is problematic because it means a smaller proportion of the population ready to contribute to the economic activity that has to support everyone. But the numbers suggest it’s more a matter of demographics than the economy – let alone policy.

U.S. job figures for January are slated to be released on Feb. 7 by the Bureau of Labor Statistics.

U.S. job figures for January are slated to be released on Feb. 7 by the Bureau of Labor Statistics.