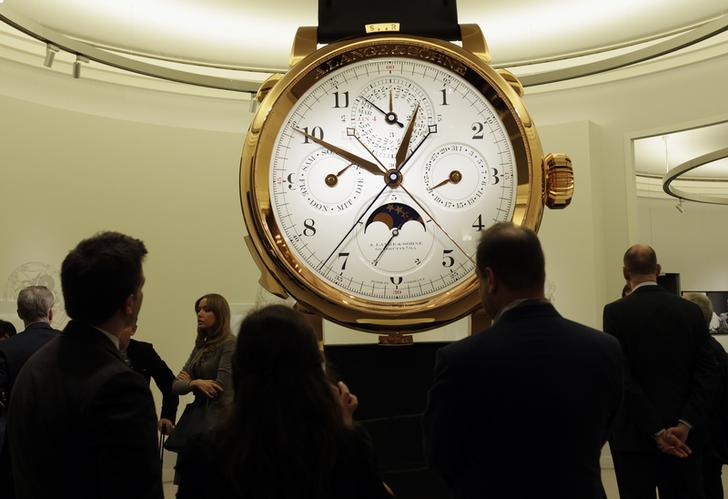 If only the luxury market ran as precisely as one of Richemont’s posh watches. The Cartier owner reported a disappointing 3 percent year-on-year increase in first-half sales, after stripping out currency moves, sending its shares down 8 percent in early trading on Nov. 6. Management blamed poor demand for watches and weakness in Hong Kong, one of its key markets. But the best explanation might simply be that after a decade of runaway growth, luxury is returning to its faddish ways.

There are some familiar themes. Richemont hasn’t been doing well in Asia. Revenue dropped 17 percent in the first half, mainly because Chinese shoppers are spending elsewhere. Japan is the one bright spot, with Chinese tourists powering a 44 percent year-on-year increase in sales. They also helped boost the group’s European business by around a quarter. China’s state-led corruption purge is so well known as a cause of slower luxury sales that it barely gets a mention anymore.

What’s harder to explain is why things have suddenly got worse. Richemont’s five-month trading update on Sept. 16 beat expectations. Sales since then have been terrible, with October down 6 percent. It’s not that the wealthy are reining in – sales at its jewellery brands, where a Cartier necklace can cost several hundred thousand euros, grew 18 percent. The conclusion – hardly satisfactory – is that it’s just a bad time to be selling very expensive watches, especially in Richemont’s core market of Hong Kong.

It is getting harder for luxury groups to come up with convincing explanations about lumpy demand, beyond the old fashioned one: that luxury products are super-discretionary. That sounds obvious. Yet companies and investors have got used to several years of double-digit revenue growth, which they justified by generous demographic projections. Sales of personal luxury goods – everything from handbags to diamond bracelets – slowed to 1 to 2 percent in 2015, according to Bain. That’s a far cry from 2010’s 14 percent pop.

Visitors look at a giant watch reproduction on the A. Lange and Soehne booth at the "Salon International de la Haute Horlogerie" SIHH exhibition at the Palexpo in Geneva January 21, 2013. 16 brands of watches and jewellery, part of the Richemont group, exhibit their new models from January 21 to 25, 2013.

Richemont said it expected a challenging second half after net profit in the first half through September grew less than expected and demand for its luxury watches deteriorated further in October.

Sales to Sept. 30 increased 3 percent at constant exchange rates, year-on-year. Asia Pacific, where the group makes a third of its sales, fell 17 percent. Europe, also accounting for a third of sales, was up 24 percent. Japan also showed strong growth of 44 percent, helped by tourist demand.

The company, whose brands include Cartier and Van Cleef & Arpels, said that Hong Kong and Macau were weak, although retail demand in China picked up.