Jobs but not for all 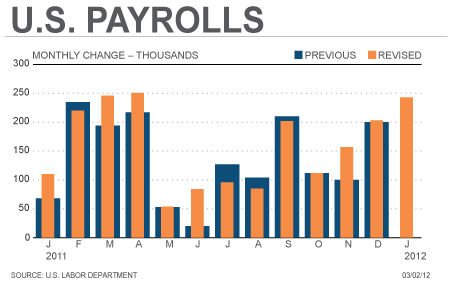 U.S. nonfarm employment increased by 243,000 on a seasonally adjusted basis in January, according to a Feb. 3 release from the Bureau of Labor Statistics. The unemployment rate declined by 0.2 percentage point to 8.3 percent.

The labor force participation rate declined to 63.7 percent in January from 64.2 percent a year earlier, bringing it to its lowest level since December 1981; between 1998 and 2007, it averaged 66.5 percent.

The number of those unemployed for 27 weeks or more fell by 70,000 to 5.52 million, representing 42.9 percent of all those without jobs. That’s down from the peak of 45.5 percent in March 2011 but still far above historical levels. Between 1948 and the downturn that began in 2008, the peak for long-term unemployment was 26 percent of all jobless people, in June 1983.

Nonfarm business sector labor productivity increased at a 0.7 percent annual rate in the fourth quarter of 2011 and by 0.5 percent from a year earlier, the BLS said on Feb. 2.