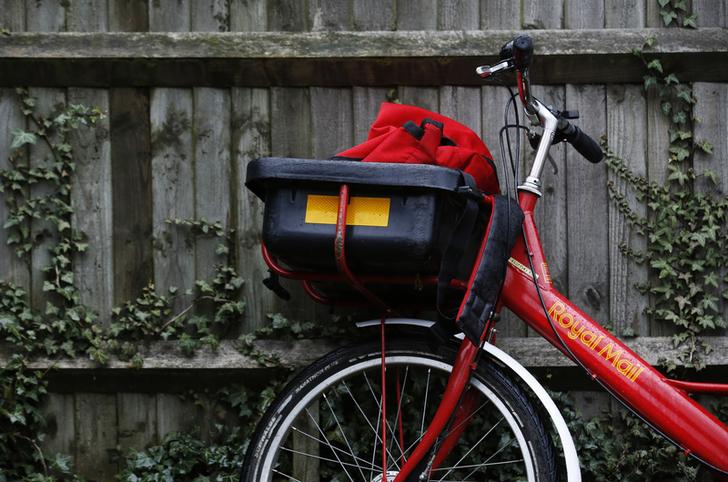 Royal Mail is delivering in an old-fashioned way: through hard work. Measures being taken to improve a service that celebrates its 500th birthday next year boil down to a relentless attention to detail.

Hats off to Moya Greene, the Canadian chief executive who led the company through what proved to be a controversial privatisation in 2013. OK, so half-year results published on Nov. 19 showed flat overall revenue of 4.4 billion pounds. But Greene also reported that Royal Mail’s parcels business grew and the letters side is shrinking at the bottom end of its long-running 4-6 percent annualised expectation. GLS – Royal Mail’s largely overseas offshoot – saw sales rise 8 percent.

Half-year pre-tax profit also fell thanks to what the company calls transformation costs. Shares in Royal Mail rose 6 percent, however, largely as the company said it expects full-year underlying operating costs in the core UK parcels and letters business to fall by about 1 percent.

A key part of that improvement comes via changes in the working practices among Royal Mail’s 140,000 UK staff. A dismally poor history in industrial relations cast a pall over the company at privatisation, and for years before. Greene, with a finely judged mix of determination and sympathy, seems to have persuaded employees to shed their strike-prone habits. Dozens of other smaller things help: ranging from tracking mail more accurately to accepting more post later in the day and at weekends.

The internal improvements at Royal Mail, however, come in the context of external pressures which are also entrenched. Britons are writing fewer letters. Royal Mail has a costly obligation to deliver post to UK addresses near and far on the same tariff. Ofcom, the regulator, is currently reviewing whether Royal Mail is doing enough to help rivals become more competitive.

Royal Mail can probably sustain a share price around the current levels – about 13 times forward earnings. It might manage to close the 10 percent discount, given by Eikon, with quoted European peers. The 5 percent dividend yield also supports the investment case.

It takes special skills to succeed in trying circumstances. Royal Mail’s headwinds, though, are unrelenting.

A postman's Royal Mail bicycle is propped against a fence at Send in southern England March 25, 2014