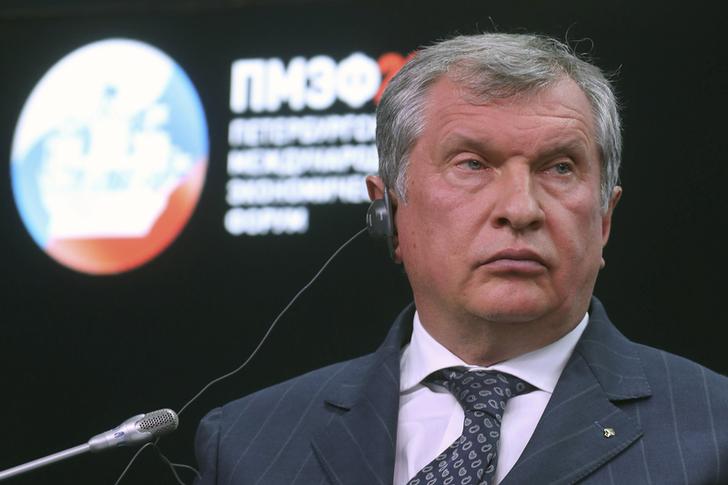 Moscow’s most influential oil official has given a strong sign that the Kremlin may be serious about cutting a grand bargain with OPEC. Igor Sechin, chief executive of Rosneft, suggested on Feb. 10 that cuts of as little as 1 million barrels per day of crude by major oil producers would be enough to boost oil prices. For struggling members of OPEC like Venezuela and Nigeria, a deal among the world’s great oil powers might just come in the nick of time.

Brent crude has fallen by almost 20 percent this year. Goldman Sachs warned on Feb. 9 that oil could slump below $20 per barrel amid a glut of supply. That should have the world’s biggest oil producers putting aside their political differences in the Middle East and agreeing to limit supplies. Instead they have opened their spigots wider. Russian output has hit new post-Soviet era records this year and Saudi is pumping comfortably above 10 million barrels per day, its highest rate in at least 15 years, according to Datastream.

Coming from Sechin, normally a critic of OPEC, such remarks could signal a deal is possible. But most importantly, politics suggests one ought to be. If coordinated, a plan between OPEC and Russia to trim what would be the equivalent of just 2.3 percent of their combined output could create higher prices, but without a significant shift in market share if all take part. Sechin didn’t make a firm commitment, but has floated an achievable figure that can get talks going.

Saudi Arabia might rather wait for market forces to run their course and shut down higher-cost producers. But that isn’t happening quickly. OPEC’s latest monthly report forecasts production outside the cartel falling by just 700,000 barrels per day this year. Meanwhile, lower prices have left Venezuela with a near 99 percent probability of default, based on the price of its 10-year credit default swaps, while Nigeria’s swaps imply a 56 percent chance of default. If the olive branch is proffered, all sides have a strong reason to grasp it.

Top Russian oil official Igor Sechin floated on Feb. 10 the idea of coordinated cuts among major producers including the Organization of the Petroleum Exporting Countries. The head of Rosneft said that oil producers cutting just 1 million barrels per day from global supply would be enough to boost oil prices. His comments come after weeks of high-level diplomacy between Russia and some OPEC nations aimed at forging a deal on output.

Russian Foreign Minister Sergei Lavrov raised the prospect of negotiations with the Organization of the Petroleum Exporting Countries for a potential cut to oil production early in February. Following a meeting with his counterpart in the United Arab Emirates on Feb. 2, Lavrov said that Russia would be willing to sit down with OPEC to address the slide in oil prices.

An agreement to cut production would require an emergency meeting of the cartel, which Venezuela has been pushing for. Its oil minister Eulogio Del Pino has failed so far win support from key members such as Saudi Arabia for an accord. Del Pino left a meeting on Feb. 7 with his Saudi counterpart Ali al-Naimi empty handed with the world’s largest exporter of crude unwilling to turn off its oil spigots to boost prices.