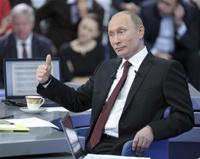 The oil reserves of Russia are twice those of the U.S. Yet output is only rising half as fast. A penalising tax code that discourages drilling for harder-to-reach oil is to blame. Making exceptions for the likes of Exxon is no substitute for bold reform.

Russia’s oil production will increase by less than 200,000 barrels a day in the two years to 2013, according to estimates by PFC Energy.
The energy consultancy expects that the United States will boost production by slightly over 400,000 barrels a day.
According to BP, Russia has proven oil reserves of 88 billion barrels, more than twice the 31 billion barrels held by the United States.
In 2011 the United States pumped an average of 7.8 million barrels a day, compared to 10.2 million barrels in Russia.
Russia taxes oil companies largely on the basis of revenue rather than profit.
Vladimir Putin, Russia’s president, has proposed tax breaks for pumping unconventional reserves such as shale and other harder to extract crudes. Unconventional oil provides just four percent of Russia’s production.
In April Putin granted a separate group of tax breaks to offshore energy projects that have since encouraged Exxon Mobil, Eni and Statoil to collaborate with Russia’s state oil firm Rosneft.
In 2011 oil and gas revenue amounted to 5.64 trillion roubles of revenue out of a total of 11.37 trillion, according to the nation’s finance ministry.