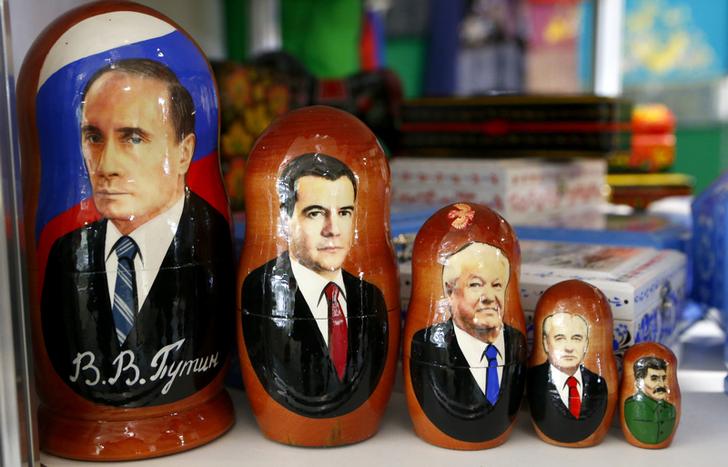 Like Russian matryoshka dolls, the country’s biggest lenders are snapping up the assets of weak players stricken by sanctions. If Russia and the West can thaw their relations – and the Paris attacks of Nov. 13 may provide a possible reason to do so – the dominant players could cement their gains. It’s a kind of nationalisation by stealth.

Russia’s central bank has revoked the licences of more than 80 mainly small banks this year, close to the number for the whole of 2014. Large state-owned banks like VTB and Russian Agricultural Bank have scooped up orphaned retail depositors. Big private lenders like FC Bank Otkritie and Credit Bank of Moscow have grown in corporate lending, according to data from Fitch.

Look at Russia’s bank sector broadly, and things still look sketchy. There are 700 lenders, yet the top 30 account for more than 80 percent of the banking sector’s entire balance sheet. Liquid assets cover less than 60 percent of short-term deposits on average, according to Moody’s. Non-performing loans could hit 14 percent by the end of next year, yet only four-fifths of those would be covered by provisions. More small banks will fail.

Accounting and capital fudges help. Banks are allowed to use November 2014 exchange rates to flatter their risk-weighted asset calculations. Regulators have scope to lower bank capital requirements, delay new capital surcharges and push back rules limiting counterparty exposures to 20 percent. That would benefit Otkritie, which has a precarious 229 percent of total capital in this form, according to Moody’s. But these workarounds just mask the weakness of the sector rather than address it.

The best hope for Russia’s banks is that Western sanctions end, easing the country’s economic distress. But even assuming that happens, Russia’s bank sector has changed irreversibly. There are a third fewer banks than at the peak, and the Kremlin has injected 625 billion roubles ($9.4 billion) of capital into the biggest so far this year, helping them mop up fragile matryoshka-like peers. If relations between Russia and the West thaw, the chosen few will be stronger than before.

Two of the banks had infringed rules governing minimum capital levels, one was suspected of submitting misleading financial reports and the fourth of breaking laws on money laundering and financing terrorism, the central bank said in statements on its website.

The central bank has revoked the licences of around 80 banks this year, approaching the 87 licence withdrawals of 2014.