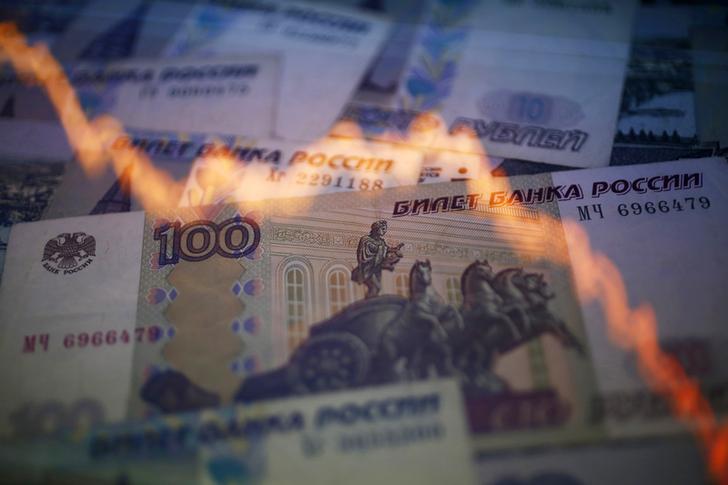 The three main Western banks in Russia are in a curious position. With domestic lenders hobbled by sanctions, the biggest foreign competitors – Raiffeisen Bank International, UniCredit and Societe Generale – are well placed to grab market share. But first they have to withstand the latest Russian crisis. That looks harder for some than others.

Russia needs foreign lenders to help keep its tottering economy going. But the nightmare scenario for all Western banks – a complete expropriation of foreign banks’ assets by President Vladimir Putin – isn’t impossible, especially if a new round of Western sanctions are imposed. Foreign banks have to weigh the risk of total wipeout with the eventual rewards.

The easiest call is for SocGen. Russia is a “nice to have”: despite being only 3 percent of group exposure it provides as much as 10 percent of net profit. If Russia were to experience a banking crisis like that of 1998-99 – when cumulative loan losses hit 11 percent – SocGen would only shed 55 basis points of its Basel III core Tier 1 capital ratio, according to Deutsche Bank. The bank’s decision to take a 525 million euro goodwill writedown on its Rosbank unit, and to provision Russian bad loans to 81 percent, now looks prudent.

UniCredit is a bit more tied in. Although it would only lose 31 bps of its capital if losses echoed those of 1998-99, Russia accounts for 17 percent of net profit. The Italian lender also covers only 60 percent of its Russian non-performing loans with provisions.

But both banks look better off than Raiffeisen. The Austrian bank may have 74 percent coverage on its Russian bad debts, but Russia currently constitutes over three-quarters of group profit. A 1998-99 crisis would mean its common equity Tier 1 ratio falling from 10.2 percent as of September to 8.5 percent.

While SocGen and UniCredit could probably deal with losing their shirts in Russia, Raiffeisen’s capital ratio could slip below regulatory minimums. Raising capital for the Austrian lender is a problem – it could mean diluting its mutual owner. The more that rouble declines push up bad debts, the more it will be harder for it to share in any eventual Russian recovery.

UniCredit Chief Executive Federico Ghizzoni said on Dec. 16 that he did not expect to take a writedown in the fourth quarter or next year on the Italian lender’s Russian unit, and that the fundamentals of the business were strong. He added that it made an important contribution to group profitability.

A reflection of a yearly chart of U.S. dollars and Russian roubles are seen on rouble notes in this photo illustration taken in Warsaw November 7, 2014.

UniCredit Chief Executive Federico Ghizzoni said on Dec. 16 that he did not expect to take a writedown in the fourth quarter or next year on the Italian lender’s Russian unit, and that the fundamentals of the business were strong. He added that it made an important contribution to group profitability.