Rain on my parade 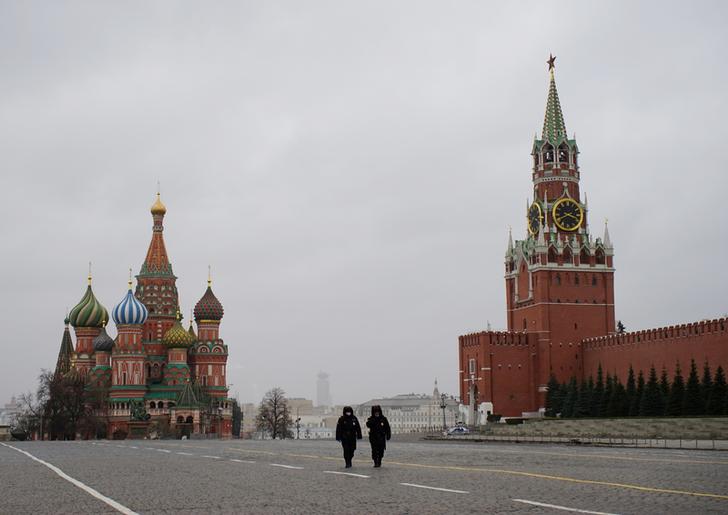 The double whammy of a crude price collapse and Covid-19 could cause a hefty budget deficit. Moscow’s $170 bln wealth fund can plug a hole worth 5% of GDP if need be. The issue is more the optics of raiding the piggy bank while looking relatively stingy on subsidising wages.

Police officers walk along the Red Square, with St. Basil's Cathedral and the Kremlin's Spasskaya Tower in the background, after the city authorities announced a partial lockdown ordering residents to stay at home to prevent the spread of coronavirus disease (COVID-19), in central Moscow, Russia March 30, 2020.

Brent crude was up 24 cents, or 1.1%, at $21.57 by 0622 GMT on April 24, after rising more than $1 earlier and jumping 5% on April 23, a week before the Organization of the Petroleum Exporting Countries, Russia and other producers, a group known as OPEC+, was due to implement a deal to cut supply.

Russia has allocated 2.8% of its GDP in additional resources to fund measures to fight the coronavirus.

Russia has around $170 billion in its National Wealth Fund, which accumulates revenues from oil exports and was initially designed to support the country’s pension system, more than $120 billion of which are liquid assets.

The fund is expected to be worth 7 trillion roubles at the end of 2020, taking into account current planned spending, Finance Minister Anton Siluanov said on April 19, according to the TASS news agency.