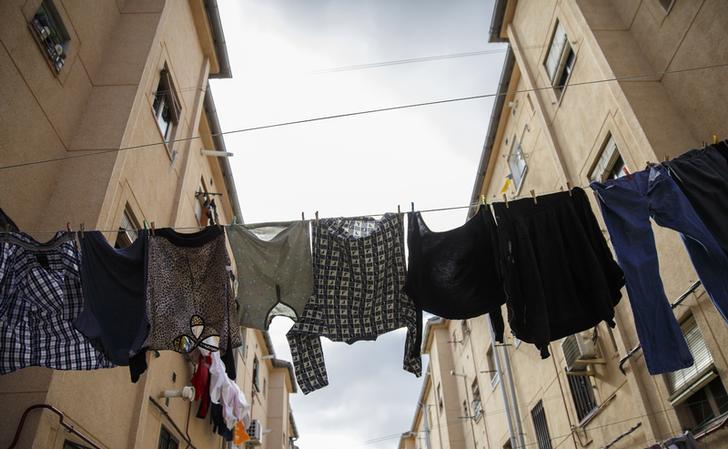 The 1.8 bln euros paid for the builder’s commercial property unit is at a hefty premium to net asset value. Investors are piling into funds focussed on offices or hotels. The residential market is a different story. The worst is over but it’s likely to bump along the bottom.

Clothes hang between buildings near the home of Abraham Carmona, 24, and his wife Marina Maya, 24, in Madrid March 3, 2014

Merlin was one of several real estate funds that debuted on the Spanish stock exchange last year, raising 1.25 billion euros to invest in commercial real estate. It secured an additional 614 million euros of fresh capital in May. Hispania, another real estate fund, increased its capital by 50 percent on April 28 after investing nearly all the money it raised in last year’s IPO.

Sacyr had been studying the possible sale of shares in the unit for more than a year as part of a drive to restructure its balance sheet.

House prices fell 0.1 percent in the first quarter of the year, compared to the same period a year earlier, according to the Ministry of Public Works. It said house prices have fallen by 30.4 percent in nominal terms since the 2008 peak, or 36.3 percent in real terms.