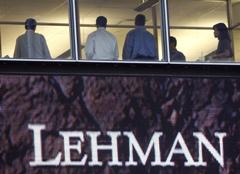 The Bundesbank is no match for King Arthur. The legendary Celtic ruler drew the sword Excalibur from the stone with little effort, but the German central bank has taken over three years to start to offload its own Excalibur, a collateralised debt obligation backed by risky real estate debt constructed by the chivalrous financial engineers at Lehman Brothers. The bonds are among collateral the euro zone central banks had accepted in exchange for loans to Lehman and several Icelandic banks, which failed in 2008, forcing the euro zone to take a 5.7 billion euro provision, subsequently reduced to 2.2 billion euros.

At the time of the Lehman failure, the ECB was lending about 450 billion euros to euro zone banks. In the current sovereign chapter, it is providing much more support: currently about 674 billion euros, including 489 billion euros provided in the first of two three-year liquidity injections in December. The total could increase by up to 400 billion euros more in the second injection in February, Morgan Stanley estimates.

Will the new chapter lead to larger losses than the last one? That’s hard to say. The three-year funds should reduce the risks of a painful bank deleveraging or failures, reducing the chances of losses. But in some respects, the collateral is worse. The ECB is temporarily lifting restrictions on credit claims, allowing banks to pledge less widely-traded debt. But the rules have been tightened to make asset-backed debt pledged simpler. In any case, the ECB might avoid much of the political flak any losses will bring. It has said that any losses on credit claims will be borne by the national central banks, and indirectly by the national governments, not the ECB.

Whatever the comparison with last time, it’s clear that the provision of three-year funds brings big risks onto the central banks’ balance sheets – probably worse risks than many private creditors would be prepared to take on. Such risk-taking may be a less bad way to proceed than letting banks fail from a lack of funding, but it would complicate the work-outs of any banks that do fail. If losses materialise, Mario Draghi, the ECB’s president, will regret not having an Arthurian Excalibur, which came with a sheath that made the wearer invincible.

People stand next to windows above an exterior sign at the Lehman Brothers headquarters in New York in September, 2008

The Bundesbank is selling a portfolio of 1.8 billion euros of real estate loans and bonds that it was left with after the failure of Lehman Brothers in 2008, the Financial Times reported on Jan. 19.
The Bundesbank has already agreed to sell half of the debt to private equity firm Lone Star, to which it may also sell the rest of the loans, the Financial Times reported.
Euro zone central banks took a 5.7 billion euro provision in 2008 after the failure of Lehman Brothers and Icelandic bank subsidiaries left them with hard-to-sell collateral against 10.3 billion euros of loans to the failed banks. The provision has since been reduced to 2.2 billion as of Dec. 31 2010. The real estate loans the Bundesbank is now selling were part of a collateralised debt obligation called Excalibur.