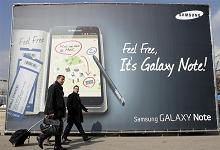 Samsung investors are worrying too much about Apple. The company’s shares have slid on concern the iPhone’s maker might be buying Japanese memory chips to cut its dependence for parts on its South Korean rival. But Apple’s diversification only reflects how smartphone demand is outpacing parts supply. Apple still needs Samsung and Samsung’s valuation has fallen too far.

The gadget-maker’s shares fell 6 percent on May 16 on reports from Taiwan that Apple was putting in big orders for memory chips with Japan’s Elpida Memory. Apple might like to diversify: Samsung is not only a major supplier of parts, but its biggest rival. Samsung toppled Apple in the first quarter as the world’s most popular smartphone maker, according to research firm Gartner. Because Apple is Samsung’s biggest single customer, investors worry a shift by Apple will hurt Samsung’s 45.3 trillion won in quarterly revenue.

They can relax: sales of memory to Apple account for less than 1 percent of Samsung’s overall sales, according to Citigroup. Samsung makes more selling it logic chips and screens, but even those add up to only about 5 percent of total sales. Samsung’s parts by contrast make up an estimated 25 percent of the iPhone. Apple’s Elpida purchases most likely result from a shortage of supplies as it ramps up production of the iPhone 5. Samsung can’t easily dedicate more capacity to its U.S. rival.

The launch of the new iPhone in June may be a bigger worry for Samsung, particularly amid slowing growth in China. But global smartphone sales still grew by roughly 45 percent in the first quarter, with Samsung’s mobile sales soaring by 86 percent thanks to the popularity of its larger, 5.3-inch, Galaxy Note phone-tablet. Apple is following suit by swapping the iPhone’s 3.5-inch screen for larger 4-inch LCDs in the iPhone 5.

Investors are discounting Samsung too much. The company’s should grow by 62 percent in 2012, according to consensus forecasts, yet after this week’s decline, the shares trade at just 8.2 times projected 2012 earnings. That’s below Apple, and other peers like LG Electronics and SK Hynix. Investors should have more faith.

Shares of Samsung Electronics fell 6.2 percent on May 16 after a Taiwan electronics trade publication reported that Apple had placed large orders to buy mobile DRAM chips from bankrupt Japanese semiconductor company Elpida Memory. The shares fell a further 0.57 percent on May 17 to close at 1.223 million won.

Shares of Samsung Electronics fell 6.2 percent on May 16 after a Taiwan electronics trade publication reported that Apple had placed large orders to buy mobile DRAM chips from bankrupt Japanese semiconductor company Elpida Memory. The shares fell a further 0.57 percent on May 17 to close at 1.223 million won.