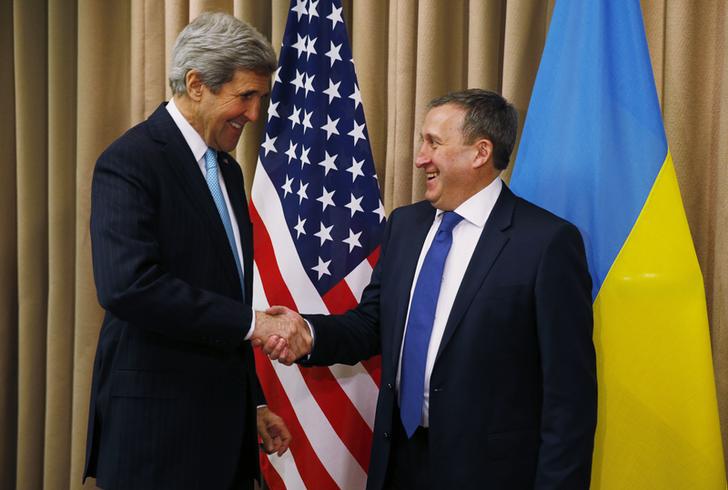 Vladimir Putin has set the stage well for the first international talks on Ukraine. Armed pro-Russian separatists have seized buildings in several eastern Ukrainian cities. Their uniforms and weapons suggest they are equipped by the Russian army, if not part of it. The rebels’ success has shown that the government in Kiev is not in control of the country – not even of its own security forces.

It’s far from certain that Putin wants to annex part of all of Ukraine, Crimea-style. He has already reached his goal: he has demonstrated that Ukraine doesn’t have a real government, after encouraging Russian-speaking separatists and drowning eastern Ukraine with relentless propaganda on Russian-language TV channels. Those are techniques of agitation and provocation taken from the best old-style KGB handbooks.

Russia’s stated goal for Ukraine is “federalisation” – wide regional autonomy that would result in a de facto split of the country, with the eastern half under Moscow’s influence. Putin has backed his demand with open threat of military intervention to “protect Russian speakers.” He hopes that Europe and the United States will cave in, fearful of the consequences of a full-blown economic war.

In the talks, due to be held in Geneva on April 17, the U.S. and Europe will only threaten tougher sanctions on Russia. The U.S. position is important politically but doesn’t matter much in the real world: severe, Iran-style sanctions would cost the American economy little. Europe, on the other hand, still depends on Russia for an important, albeit declining, part of its energy needs – and also for a bit of trade or, in the case of the City of London, finance.

Serious economic sanctions would inflict incommensurately more pain on Russia, which was already entering a serious crisis, than on Europe itself. But the EU is pain-averse. So it is playing legalese, saying it must wait for overt signs of Russian intervention before it acts.

Such wavering needs to be set against the price Europe would have to pay later for a divided Ukraine on its border, dominated by an expansionist Russia emboldened by Western weakness. If Putin is to be stopped, the sooner the cheaper.

U.S. Secretary of State John Kerry (L) shakes hands with Ukraine's Foreign Minister Andrii Deshchytsia at the start of a bilateral meeting to discuss the ongoing situation in Ukraine

Separatists attacked a base of the Ukrainian national guard overnight and Kiev said three separatists were killed, the worst bloodshed yet in a 10-day pro-Russian uprising in east Ukraine, overshadowing crisis talks to resolve the conflict.

Ukrainian, Russian and Western diplomats arrived for the emergency talks in Geneva, but there was little hope of any progress in resolving a crisis that has seen armed pro-Russian fighters seize whole swathes of Ukraine, while Moscow masses tens of thousands of troops on the frontier.

President Vladimir Putin, who overturned decades of post-Cold War diplomacy last month by declaring Russia’s right to intervene in neighbouring countries and annexing Ukraine’s Crimea region, accused the authorities in Kiev of plunging the country into an “abyss.”

European countries and the United States are threatening Russia with more sanctions unless it takes steps at the Geneva meeting to show it will de-escalate the conflict in Ukraine, although officials say they expect no breakthrough.