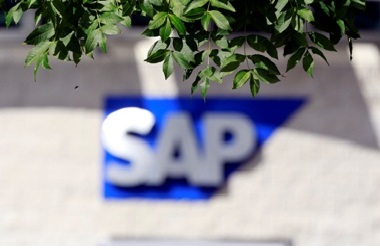 The German tech group is finding the transition to internet-hosted software less of a breeze. Weak traditional sales have forced it to cut 2014 guidance. Cloud revenue is growing but is still only 6.5 pct of revenue. The valuation offers little protection against a soaking.

A SAP logo is seen at its offices in the CityWest complex, Dublin, September 5 2013. REUTERS/Cathal McNaughton

Shares in SAP fell as much as 5.4 percent on Oct. 20 after the German technology company cut its full-year guidance on a drop in traditional packaged software sales.

Non-IFRS software sales fell 3 percent in constant currency terms to 951 million euros in the three months to September versus the same period a year earlier.

Traditional licensed software revenue is booked as soon as it is sold, while cloud-based software orders are spread over the period of the contract for accounting purposes.

The company said it anticipates that the cloud business along with growth in support revenue “will drive a higher proportion of more predictable revenue in the future.”