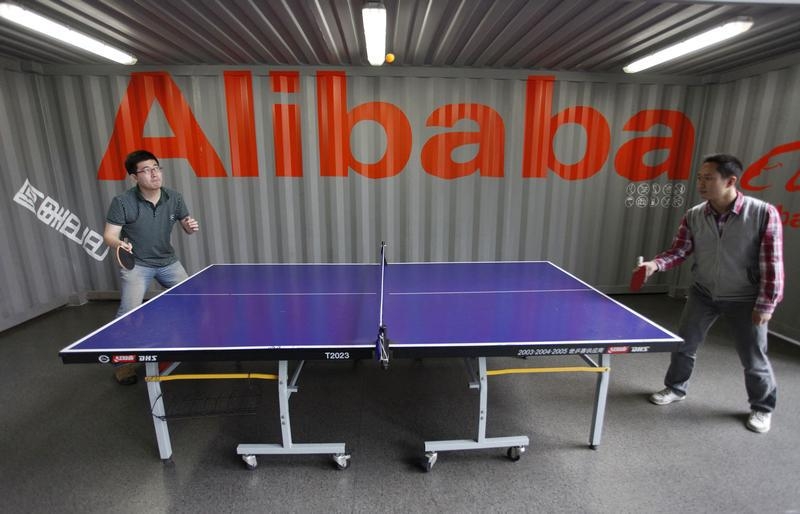 Jack Ma is a force of nature, and he pushes Alibaba in unexpected directions. Like counterpart Jeff Bezos at Amazon, Ma has built online retail dominance. But “predictable” isn’t a word to describe either company. The Chinese group’s stock tumbled more than 10 percent on Thursday following its latest financial results. That followed a 4.4 percent decline on Wednesday after a Chinese regulator targeted Alibaba. The two-day loss in market value tallies to nearly $40 billion.

That’s Amazon-style volatility. The U.S. company, due to unveil its own quarterly results later on Thursday, failed to match what analysts expected in its last report in October, costing the shares more than 10 percent. One big difference is that Alibaba, now worth around $220 billion, generates good money, whereas the $140 billion Amazon has lately reported losses. Yet both powerhouses remain firmly hitched to the visions and idiosyncrasies of their founders, making it hard to forecast or even understand their performance.

Hence an enhanced likelihood of surprises – although they’re inevitable for Alibaba, whose valuation, at a price-to-forecast earnings ratio of around 40, depends heavily on rapid growth. It’s not as though the firm’s quarterly numbers were bad. Revenue in the three-month period to December shot up 40 percent from a year earlier to $4.2 billion, and adjusted EBITDA margins rebounded to nearly 60 percent after dipping in the previous quarter, its first results following a record-setting initial public offering. Rather, they fell short of bullish projections on Wall Street.

The earnings disappointment came hot on the heels of a scathing critique of Alibaba’s controls over vendors by China’s industrial watchdog. The company called the report flawed and said it would make a formal complaint. The episode nevertheless dented faith in Ma’s good relations with Beijing. These are needed not just for Alibaba’s business, but also to ensure that the structure of the company, which involves widely used but not fully battle-tested methods of skirting Chinese foreign ownership restrictions, doesn’t come under serious attack.

With Alibaba stock trading some 30 percent above last fall’s IPO price, many investors will still be sitting on gains. Those who can’t take this week’s kind of heat, however, should probably exit Ma’s kitchen.

Alibaba’s revenue rose 40 percent to $4.22 billion in the quarter to December, the company said on Jan. 29, but missed the average analyst estimate of $4.45 billion, according to Thomson Reuters I/B/E/S. Quarterly revenue fell short of analysts’ expectations, showing signs of a slowdown in the Chinese e-commerce company’s scorching growth.

The company’s shares were down more than 10 percent in early morning trade in New York on Jan. 29.

Gross merchandise value, or the sum of all Alibaba’s online commerce transactions, rose 49 percent to $127 billion. Mobile GMV accounted for 42 percent of total GMV, up from 36 percent in the September quarter.

The pace of revenue growth was slower, however, as sales through mobiles, which typically have lower margins, accounted for a bigger slice of the total than in the previous quarter.

Adjusted EBITDA margins bounced back to 58 percent from 50.5 percent in the July-September period.

The number of annual active buyers on Alibaba’s various services, another closely watched metric, rose to 334 million in 2014 from 307 million in the year to September.

China’s industrial watchdog on Jan. 28 published a report on its website accusing Alibaba of lax controls over its vendors, prompting the e-commerce group to say it would file a complaint against one of the regulator’s staff.