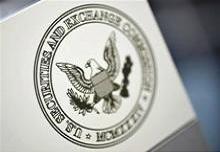 The U.S. Securities and Exchange Commission is finally putting the squeeze on Wall Street deadbeats. The watchdog this week won a court order forcing a hedge fund manager to cough up $12 million in overdue fines. This rare debt-collecting tactic is welcome, but a drop in the bucket for an agency with a low collection rate.

The SEC’s arsenal is admittedly limited. Among its favorite weapons are judicial injunctions blocking wrongdoers from violating securities laws in the future. But these have little practical effect and may no longer be valid after a federal appeals court struck one down last month.

That leaves penalties and orders to repay ill-gotten gains. These are strictly capped by law, as a federal judge in New York bemoaned earlier this month. He called a $1 million settlement with two Bear Stearns hedge fund managers “chump change” compared with the $1.6 billion investors lost. He still approved the deal.

The regulator has, however, failed to make the most of even its limited powers. Last year, it collected less than $1.3 billion of more than $2.8 billion levied against wrongdoers. It has hovered around this paltry 45 percent ratio for years.

In fairness, the SEC is better than most U.S. agencies at dunning deadbeats. The Yale Law & Policy Review recently found that the chief mining regulator has collected about 5 percent of fines in recent years, while the Justice Department has reeled in only about 4 percent. Overall, miscreants owe Uncle Sam more than $65 billion in fines.

But the SEC is under particular scrutiny for allegedly going easy on wrongdoers. Despite filing more than 100 actions related to the financial meltdown, it has taken heat from U.S. District Judge Jed Rakoff and other federal jurists for not bringing the likes of Citigroup and Bank of America to their knees.

SEC Chairman Mary Schapiro has responded by asking Congress for authority to impose bigger penalties. But that alone won’t do the trick. Wringing out more payments may be more effective – and may deter some would-be fraudsters. If nothing else, it would bring in some extra cash.

The U.S. Securities and Exchange Commission logo adorns an office door at the SEC headquarters in Washington, June 24, 2011. REUTERS/Jonathan Ernst

The U.S. Securities and Exchange Commission announced on June 25 that it had won a court order forcing a hedge fund manager to pay more than $12 million in overdue penalties. The order came a year after the regulator settled allegations that Lawrence Goldfarb had illegally siphoned investments from Baystar Capital Management for his own use. The settlement required him to repay the $12 million in proceeds, with interest, to investors. Goldfarb neither admitted nor denied the SEC’s allegations.