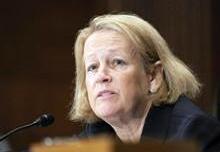 Other U.S. watchdogs could force changes on the $2.4 trln industry. But after SEC bigwigs couldn’t even agree to invite comment on reforms, any Plan B will be messy. The episode shows regulators’ priorities, the power of lobbying and the whole oversight structure in a bad light.

Securities and Exchange Commission Chairman Mary Schapiro testifies at a US Senate Banking Commitee hearing on systemic risk and market oversight on Capitol Hill in Washington May 22, 2012. REUTERS/Jonathan Ernst

Mary Schapiro, chairman of the U.S. Securities and Exchange Commission, failed in her attempt to propose reforms for the money market fund industry. Three of the five SEC commissioners blocked her plans designed to make the funds less susceptible to runs and lessen the need for future bailouts.

Money market funds registered with the SEC have $2.4 trillion under management, according to Lipper.

Commissioner Luis Aguilar was considered the swing vote, and his decision to block the proposals ended Schapiro’s hopes of bringing reforms forward.

Major fund sponsors including Fidelity Investments of Boston and Federated Investors of Pittsburgh have been among the most vocal critics of the proposed changes.