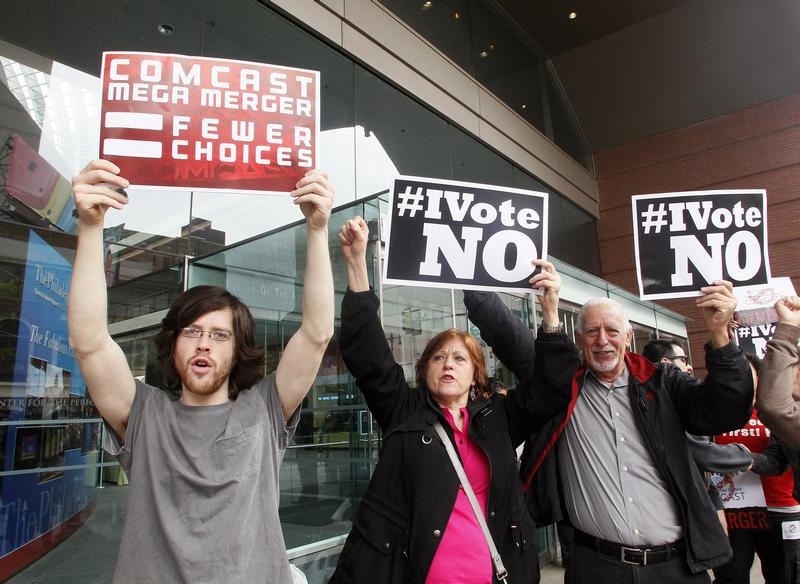 Voting to abstain is ignored, counted as a nay or both in Delaware. It always means no at the NYSE. Not voting at all is a nod to the opposition in Ohio. Such quirks are bad corporate governance. A thumbs up or down would better serve investors in the likes of Coke and Cheniere.

Three of a group of local residents and consumers organizations opposing Comcast's proposed merger with Time Warner Cable protest the deal outside the Comcast Shareholders Meeting in Philadelphia, Pennsylvania May 21, 2014. A petition with over 400,000 signatures that urges the Federal Communications Commission and the Department of Justice to reject the merger was presented to a representative of Comcast. REUTERS/Tom Mihalek

Cheniere Energy on June 2 announced the delay of its annual stockholder meeting from June 12 to Sept. 11 because of a lawsuit claiming the company had awarded shares that weren’t approved in a vote that counted abstentions, as required by Delaware law.

On April 23, Warren Buffett, chairman of Berkshire Hathaway, said he had voted to abstain on whether to approve Coca-Cola’s equity compensation plan, but that he disagreed with it. Under the company’s voting standards, abstentions have no effect and don’t count as votes against a proposal.