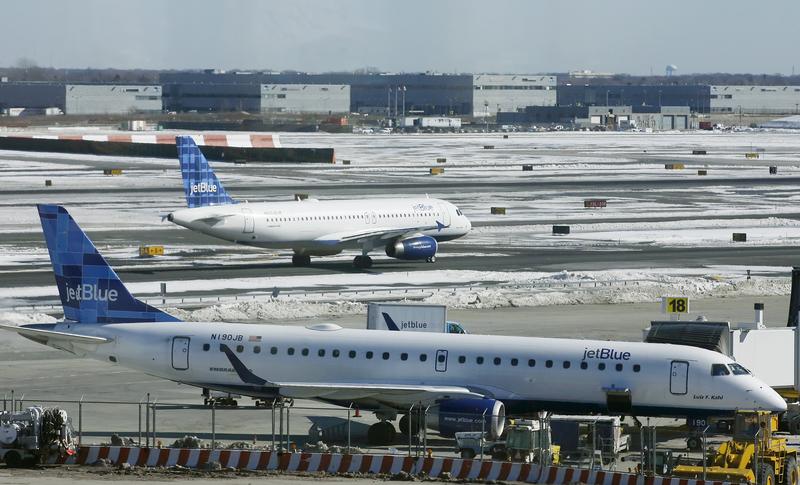 Right side, left side. Governments that bail out private enterprises create problems for themselves – especially when they try to ensure those companies don’t gouge their customers. Airlines show the problem.

On Tuesday the Wall Street Journal reported the U.S. Justice Department was preparing a lawsuit challenging an alliance between American Airlines and JetBlue Airways. The arrangement between the two companies was meant to allow both to sell each other’s flights in some areas of the Northeast including New York. It effectively merged parts of the sales structure of the business in busy hubs, enabling them to better compete.

President Joe Biden wants to be tough on antitrust, and it was his predecessor Donald Trump who authorized the earlier bailouts and the deal between the airlines. Still, as recently as last quarter, the U.S. government was bankrolling American and JetBlue. That leaves Biden and his trustbusters awkwardly balanced between contradictory interests. The better the airlines’ earnings, the faster they can pay the taxpayer back.

Now is a good time to make such promises. The U.S. labor market unusually displays both elevated unemployment and a shortage of available workers. Among financial firms, the 362,000 unfilled posts at the end of July was the highest in a decade. The number of employees who quit is running about a fifth above the monthly average since the beginning of 2011.

That means companies can reduce staffing levels more quickly than usual simply by declining to replace people who leave. U.S. Bancorp may be able to close branches without firing anyone. Since the mismatch applies to other industries too, it creates a rare window for inking deals that please shareholders without spooking workers and the politicians they vote for. (By John Foley)

Fuzzy map. Uber Technologies’ sooner-than-expected profitability depends on what’s under the hood. The company said on Tuesday its adjusted EBITDA could be as much as $25 million in the third quarter, sending the company’s shares up more than 6% in morning trading. But the details are important, and they are not disclosed.

The pandemic threw off Uber’s profitability picture as the business of taxiing people around town was crimped. While Tuesday’s adjustment included commentary that both rides and food-delivery improved, the company run by Dara Khosrowshahi didn’t provide specific figures.

Competition in food delivery has made it difficult to keep costs in line, and so Eats has been a drag on Uber. Despite the unit more than doubling revenue last quarter, it posted an adjusted EBITDA loss of $161 million. Rides earned $179 million even though revenue grew at a slower pace. Uber’s investors might welcome the profits, but as long as Eats putters along, its real potential is limited. (By Gina Chon)

Googly-eyed. Alphabet said on Tuesday it plans to buy a former freight facility on the West Side of Manhattan, St. John’s Terminal, for $2.1 billion. Google’s parent company already leases the building. The property will serve as the cornerstone of the company’s new Hudson Square campus, its largest outside of California.

If the price is any indicator, New York City real estate is back, baby. The building has approximately 1.3 million square feet, according to one of the sellers, Oxford Properties, which suggests Alphabet paid roughly $1,600 per square foot. Not only is that twice the average cost for a deal last year, according to Property Shark, it was also far higher than 2019’s average value of $948.

But Google’s purchase may be saying something else. New York-based firms have diverged from Silicon Valley regarding office attendance policies. The West Coast has been easygoing, while the East Coast firms want people back. Google, which said in August it adjusted salaries of remote workers, may be hoping that pressure in the Big Apple keeps its rank and file using building badges. (By Jennifer Saba)

Gilt free. The UK is burnishing its help for the planet ahead of the upcoming COP26 climate summit in Glasgow. The day after Prime Minister Boris Johnson pressed leaders to deliver on their commitments for a global climate fund, investors placed orders worth 100 billion pounds for the country’s inaugural 10 billion pound green bond.

Green bonds help borrowers fund investments in wind farms and the like. Yet issuing such a security does not make a country any more virtuous than if it funded those projects with ordinary debt. Still, investors love them. Britain priced the bonds, which mature in 2033, at a yield of 0.87%. That’s up to 3 basis points lower than the return on equivalent conventional gilts, IFR reckons. A saving of perhaps 3 million pounds a year helps cover the cost of setting up and running a green bond programme. Yet everybody is jumping on board: the European Union could issue 250 billion euros of the securities in coming years. As the market grows, the “greenium” may shrink. (By Neil Unmack)

Texas Sold-em. Royal Dutch Shell has left the building. The $153 billion Anglo-Dutch oil giant on Monday offloaded 225,000 acres of shale assets in the Permian basin to U.S. rival ConocoPhillips for $9.5 billion in cash. With oil at $70 per barrel, the price looks on the low side: consultancy Wood Mackenzie estimates the assets are worth more than $13 billion. But at $42,000 an acre it’s roughly in line with recent local deals, according to Berenberg analysts. And given a Dutch court has ordered Shell to slash carbon emissions by 45% by 2030, boss Ben van Beurden needs to cut somewhere.

In the short term, Shell shareholders win. Pocketing an extra $7 billion could take their total shareholder return in 2021 to 10%, Berenberg reckons and partly makes up for last year’s decision to slash the dividend by two-thirds. Chevron boss Mike Wirth recently opined that it’s better to give shareholders cash than invest in wind and solar on their behalf. Even so, if Shell wants a future after oil, van Beurden may need to do more of the latter. (By George Hay)

A JetBlue aircraft makes its way from the terminal at JFK International Airport in New York February 19, 2007.