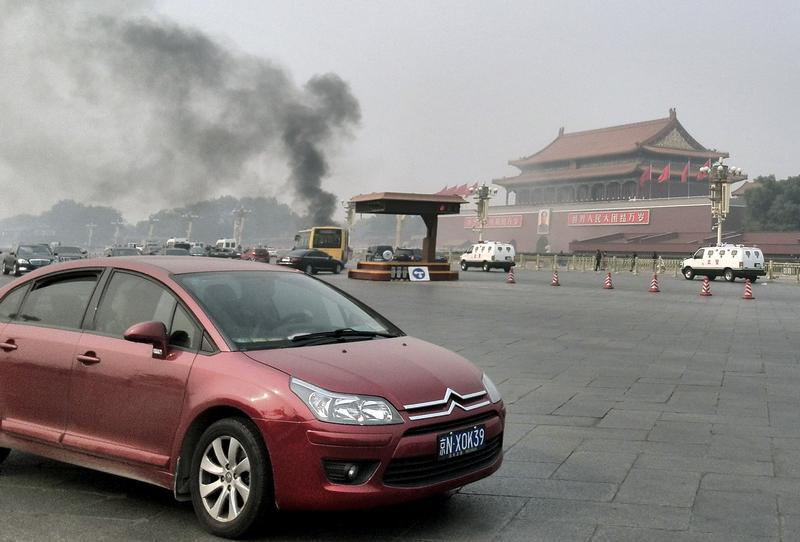 Uxin’s stock lost a third of its value after a research firm accused the newly U.S.-listed auto outfit of fudging numbers. True or not, fumes around an industry backed by Tencent and big buyout names are becoming noxious. It’s reason to steer clear of rivals waiting to go public.

Vehicles travel along Chang'an Avenue as smoke raises in front of a portrait of late Chinese Chairman Mao Zedong at Tiananmen Square in Beijing October 28, 2013. Three people were killed and many injured on Monday, police said, when a car ploughed into pedestrians and caught fire in Beijing's Tiananmen Square, the site of 1989 pro-democracy protests bloodily suppressed by the government.

Shares in Uxin closed more than a third lower on April 16 after China-focused research firm J Capital accused the Beijing-based online used-car marketplace of overstating transactions and not reporting all of its debt.

The U.S.-listed company exaggerates the volume of vehicle sales it processes by as much as 40 percent, J Capital said in a report released on the same day. It added that financial statements for Uxin’s operating companies in China show a “staggering” level of undisclosed debt that puts it at risk of collapse. The research outfit also accused Uxin founder Dai Kun of siphoning roughly $280 million from the company.

“Uxin believes that the allegations in the report are completely without merit, and strongly condemns the publishing of false and misleading information,” Uxin said in a statement on April 16.

Uxin shares closed at $1.95 each on April 16. The company’s shares are trading 78.3 percent below their June 2018 initial public offering price of $9 a share.