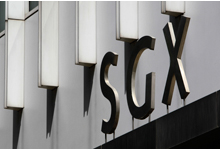 Singapore Exchange’s next chief executive will inherit a business suffering from existential angst. Current boss Magnus Bocker will leave when his contract expires at the end of June. His successor faces a challenge to boost trading volumes and attract big listings. The outlook is brighter for derivatives but the absence of M&A targets leaves SGX looking boxed in.

The main drag has been the securities business which now accounts for less than one third of SGX’s revenue. The average daily value of shares traded is close to its lowest level in five years. Though SGX has cut clearing fees, volumes have not risen sufficiently to compensate. The division’s revenue was 16.9 percent lower in the six months to the end of December compared to the same period a year earlier.

A new drive to establish direct connections with other exchanges in southeast Asia and beyond is unlikely to provide any material boost. Meanwhile, up-and-coming neighbours are eating away at SGX’s share of initial public offerings. Despite Thailand’s military coup, new listings in Bangkok raised more money than in Singapore last year.

The business remains in decent financial shape. It is debt free and its return on equity has been above 35 percent for the past four years. Bocker has successfully expanded the lower-margin derivatives business so that it is now bigger than the securities division. Margins there should improve as costs roll off and the business continues to build scale, says Morningstar. Even so, it’s far from obvious what SGX’s next CEO will be able to do to give a meaningful boost to its prospects.

The SGX sign is seen outside its building in Singapore

Magnus Bocker will step down as the chief executive of Singapore Exchange at the end of June after five and a half years in charge, the company said on Feb. 24.

SGX said that Bocker, a 53-year old Swedish national, had notified it that he would not seek an extension of his appointment beyond his current contract.

SGX added that it had hired leadership advisory firm Spencer Stuart to help assess a list of internal and external candidates to find a successor.

“We appreciate and thank Magnus for his contributions and leadership over an eventful and rapidly changing period”, SGX Chairman Chew Choon Seng said in a statement.