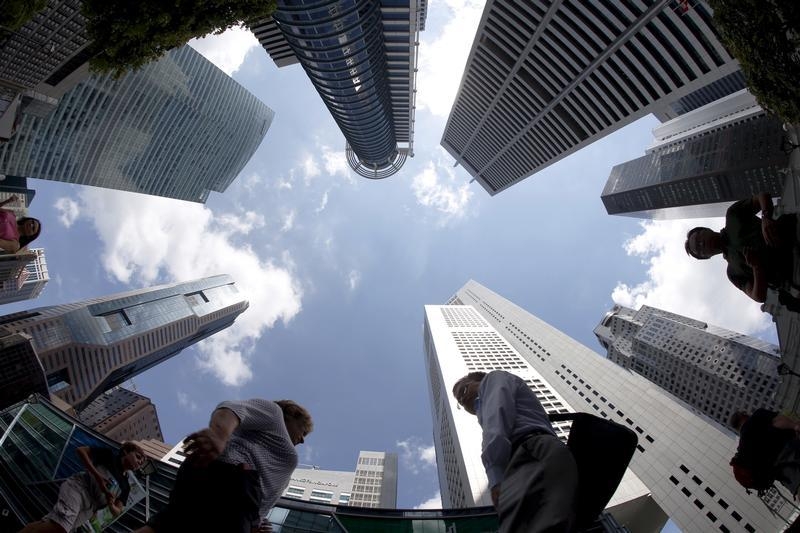 For an Asian city, Singapore can sometimes seem too much an oasis of calm. On April 14, the excitement came from an unexpected quarter: the city’s de facto central bank. The Monetary Authority of Singapore eased policy by saying it would in future keep the local currency’s effective exchange rate flat. In doing so, it is joining the global battle against deflation.

As a small, open and trade-dependent economy, Singapore sets monetary policy by managing its exchange rate against a basket of other currencies.

Until now, the central bank had adopted a policy of what it had called a “modest and gradual appreciation” of the currency. Keeping the Singapore dollar flat is a move previously associated with recessions: significantly, the MAS last took this position in the middle of the global financial crisis in October 2008.

On the face of it, Singapore has no immediate reason for concern. Its fiscal surplus and low unemployment make it seem an economic paradise to policymakers elsewhere. Nevertheless, the man on the street has been experiencing deflation for several months now, a predicament not unfamiliar in other parts of the developed world. In February, the government forecast that prices would range from flat to down 1 percent this year. The central bank’s preferred measure of inflation, which excludes rent and transport costs, remains below 2 percent.

Singapore is also showing signs of stress. On a seasonally adjusted basis, the economy did not grow at all in the first quarter compared with the final three months of last year. Though manufacturing output rose after six consecutive quarters of contraction, this was due to a temporary increase in pharmaceutical production. In the dominant services sector, economic activity shrank by 3.8 percent from the fourth quarter of 2016.

With the stock market in the doldrums and property prices falling, local bank DBS predicts growth of just 1.5 per cent this year, and says a downward revision could be on the cards. For all the outward calm, Singapore has plenty to worry about.

People walk past office buildings at the central business district in Singapore in this April 14, 2015 file photo. REUTERS/Edgar Su/Files

The Monetary Authority of Singapore (MAS) said on April 14 it was departing from its policy of “modest and gradual appreciation” of the Singapore dollar’s nominal effective exchange rate.

The city-state’s central bank said it would shift to a policy of zero appreciation of the exchange rate.

Analysts cited several months of declines in consumer prices and a weakening manufacturing and services sector as other factors behind the decision.

By early afternoon in Asia the Singapore dollar was down by more than 1 percent against the U.S. dollar to 1.366.