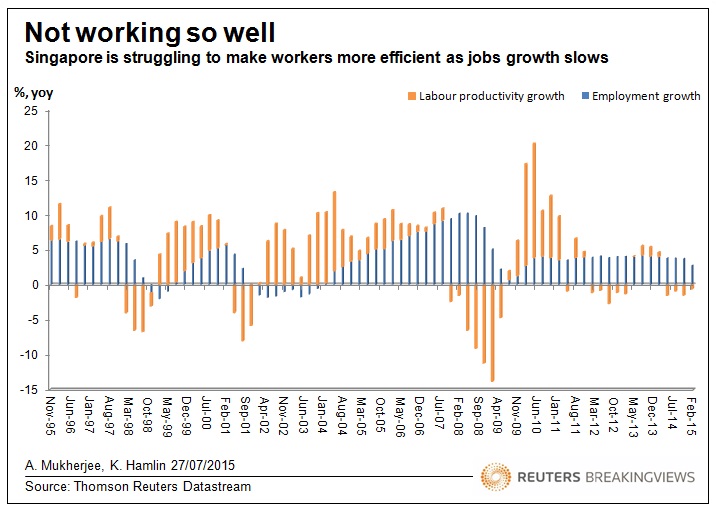 Singapore’s anti-ageing solution will only work when the global economy is healthier. In the meantime, the Asian city-state will continue to show its wrinkles.

The domestic workforce is graying and shrinking. The median resident is now 39 years old, compared with 20 when Singapore became an independent nation a half century ago. Meanwhile, voter angst at overcrowding has led to drastic cuts in immigration. Fewer than 17,000 foreigners got jobs in Singapore last year, compared with an annual average of 49,000 in the eight years through 2011. A worker squeeze is hurting businesses from retailing to banking, but may not ease even after the next elections.

There’s a clear fiscal imperative. In the absence of better productivity, fewer workers may mean slower GDP growth, lower property prices and a smaller tax kitty. Providing a decent retirement for low-income earners will become a budgetary headache. And if the half-million foreign-born permanent residents are lured away to faster-growing centres, universal health insurance for Singapore’s 3.9 million residents could become unsustainable.

Singapore is trying to defy its demographic destiny by making the workers it has more efficient. It has offered tax breaks to companies that make productivity-enhancing investments. It is also upgrading infrastructure with a new airport terminal, more buses, trains and hospital beds, and even a bigger zoo.

So far, there is little evidence the drive is having much effect. Productivity has fallen for four straight quarters. Employment is slowing, too. And yet, long-term growth pessimism may be overdone.

Trade-dependent Singapore will always need a helping hand from the world economy. When global growth picks up, the 5 to 6 percent of GDP the government plans to invest annually in sharpening the city’s productive edge will show results.

Domestic policies and global demand will combine to determine whether Singaporeans continue to nibble at a growing pie, or start eating into their reserves. The capital squirreled away by state investors Temasek and GIC could sustain Singapore’s current standard of living for many years. But Singaporeans pride themselves on their long-term thinking, which just might turn out to be the most important ingredient of the city’s anti-ageing formula.

Singapore’s economy unexpectedly shrank in the second quarter, according to advance estimates from the Ministry of Trade and Industry on July 14. GDP contracted an annualized 4.6 percent from the Jan-March quarter.

The economy added 9,600 jobs in the first half of this year, compared with 56,000 in the same period of 2014, according to data from the Ministry of Manpower. Real, or inflation-adjusted, productivity of labour fell 0.6 percent from a year earlier between January and March, a fourth straight quarterly decline.