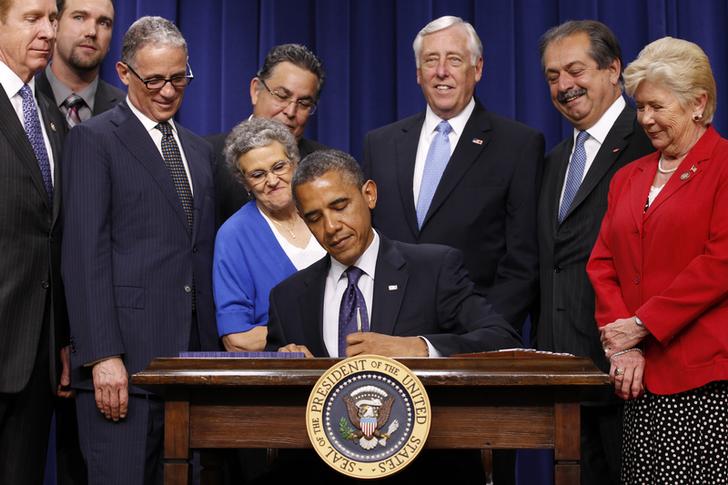 Depending who’s talking, the export lender costs taxpayers $2 bln or earns $2 bln, is essential or aids just 2 pct of exports, and helps mainly Boeing or predominantly small businesses. Ex-Im is a political football more than a linchpin of trade, and its critics have the edge.

U.S. President Barack Obama signs the reauthorization of the Export-Import Bank at the White House in Washington May 30, 2012.

The U.S. House Financial Service Committee held a hearing on June 25 to consider whether or not funding for the U.S. Export-Import Bank should be reauthorized. Funding for the government agency, which subsidizes lending to support American trade, will otherwise stop flowing on Sept. 30.

The bank has suspended or removed four officials amid allegations of improper gifts, kickbacks and efforts to direct contracts to favored businesses, the Wall Street Journal reported on June 23.

Ex-Im says that in fiscal year 2013 it supported 205,000 U.S. jobs and that it earned $2 billion for taxpayers from 2009 through 2013. The Congressional Budget Office estimates that the bank will cost taxpayers $2 billion over the next decade using market-based assumptions, although that swings to a $14 billion profit using more commonly applied federal lending assumptions.

Ex-Im reports that nearly 90 percent of its transactions benefit small businesses, although in dollar terms these deals are only 19 percent of its business. Boeing alone accounts for two-thirds of the bank’s loan guarantee business, George Mason University’s Mercatus Center calculates. The institution also finds that Ex-Im aided less than 2 percent of U.S. exports from 2009 through 2013.