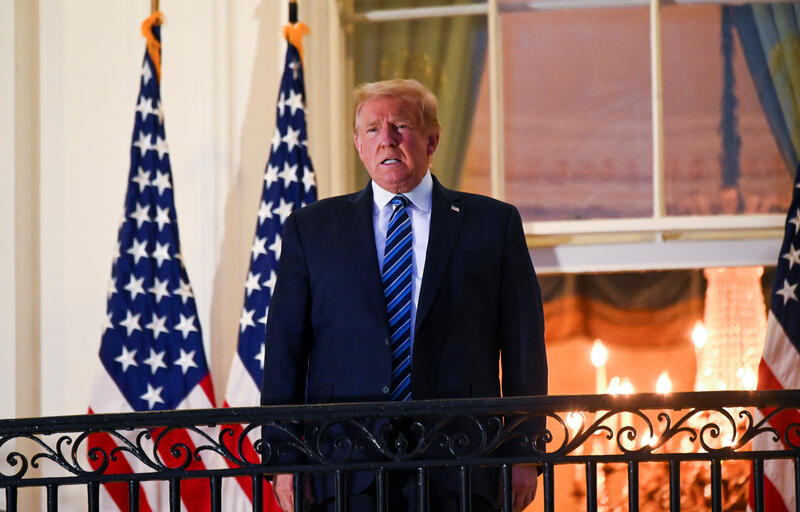 President Trump has called off aid talks with Democratic lawmakers who had targeted that huge number. A more modest plan with mutual compromises would have been better than none. Delinquent mortgages are rising, utility bills are going unpaid and household income is falling.

U.S. President Donald Trump poses atop the Truman Balcony of the White House after taking off his protective face mask as he returns from being hospitalized at Walter Reed Medical Center for coronavirus disease (COVID-19) treatment, in Washington, U.S. October 5, 2020.

U.S. President Donald Trump tweeted on Oct. 6 that he has told his administration officials to stop negotiating with Democratic lawmakers on the next pandemic-related aid package. He said he would rather wait until after the Nov. 3 elections to push a plan.

Later the same day, in a series of tweets Trump urged Congress to pass $25 billion of funding for passenger airlines, $135 billion for small businesses and stimulus checks of $1,200 for American individuals.

House Speaker Nancy Pelosi and Treasury Secretary Steven Mnuchin have been in talks for weeks but remain far apart. Democrats led by Pelosi want to spend $2.2 trillion, including maintaining $600 a week in additional unemployment benefits.

Mnuchin has proposed a $1.6 trillion plan that cuts that aid to $400 a week. Disagreements also remain over assistance for state and local governments and other issues.

Voting by the entire Congress will be delayed because the full U.S. Senate will not convene until Oct. 19. At least three senators have tested positive for Covid-19 while several others are in quarantine.