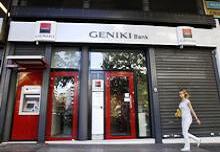 The French bank built on its trading strengths to negotiate a tough second quarter better than many peers. Provisions are still high compared to larger rival BNP. But the bank’s balance sheet will be Basel III-compatible towards the end of the year.

A woman walks in front of a Geniki bank branch in central Athens August 29 2012. Piraeus Bank is in talks to buy Societe Generale's Greek unit Geniki, as Greece's battered banks consolidate in an attempt to cope with the country's debt crisis. REUTERS/John Kolesidis

Societe Generale, France’s No. 2 listed bank, said second-quarter earnings more than doubled after a surge in securities trading and a swing to profit at its foreign retail operations defied Europe’s slump.
Quarterly net income soared to 955 million euros ($1.27 billion) from 436 million in the year-ago period, while revenue slipped 0.6 percent to 6.23 billion, the bank said on Aug. 1.
Both figures were ahead of analysts’ estimates, according to a poll compiled by Thomson Reuters’ Eikon, with the average forecast for net profit at 703 million euros and for revenue at 5.88 billion euros.