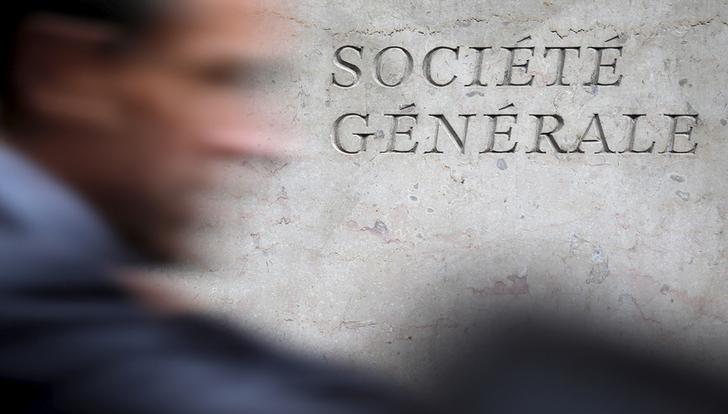 Societe Generale’s decision to sell out of active asset management could prove prescient. Since the crisis, peers like Goldman Sachs, Morgan Stanley and Deutsche Bank have done the opposite, bulking up in asset management in order to secure its capital-efficient, high returns and avoid banking’s increasingly burdensome capital rules. A bond market rout could shift the trend, though.

SocGen’s decision continues its move of a year ago, when it chose to buy Credit Agricole out of its co-owned broker Newedge. At the time, it also gave up a 5 percent stake in their other joint venture, funds business Amundi. Now it plans to list its remaining 20 percent Amundi stake.

Credit Agricole isn’t getting a bad deal. Unlike many investment banks, assets managers typically trade at premiums to book value. Using a multiple of 15 times last year’s earnings, the same that UniCredit’s asset management business was valued at earlier this year when it was merged with Santander’s funds unit, Amundi as a whole could be worth 7.5 billion euros ($8.5 billion).

The unit has also grown steadily, reaching 954 billion euros of assets at the end of March. That makes it Europe’s largest fund manager and the ninth biggest globally, with scale increasingly vital given rising regulatory costs. What’s more, European quantitative easing could push investors to stick more money with Amundi in an effort to reap gains from inflated asset prices.

Yet industry nervousness over a bond bubble and liquidity risk is equally apparent: UK funds house Aberdeen Asset Management has amassed a large cash position and arranged a credit line to stave off possible large-scale redemptions. Amundi’s 54 percent weighting to bonds could prove problematic, too: Bank of America Merrill Lynch data shows that weekly outflows from the asset class hit a two-year high this month. A reduction in market-making activity could accentuate any rush to withdraw funds. And the synergies that Amundi offers Credit Agricole look fairly limited: the bank is only targeting a relatively modest 850 million euros of total group savings by 2016.

Contrast that with the certainty that SocGen gets for selling, in the form of a 20 basis point capital boost to its common equity Tier 1 ratio. Asset management ownership hasn’t overnight become a dud. But SocGen’s example will have others thinking about how deep in they want to go.

Listing Amundi, which had 954 billion euros of assets under management at the end of March, will allow SocGen to sell out of its 20 percent stake. Credit Agricole, which owns the remainder the business, plans to keep a majority stake after the IPO.

SocGen said that selling its entire stake would improve its common equity Tier 1 ratio by at least 20 basis points.

People walk past a Societe Generale bank branch during rush-hour in Paris, May 19, 2015.

Listing Amundi, which had 954 billion euros of assets under management at the end of March, will allow SocGen to sell out of its 20 percent stake. Credit Agricole, which owns the remainder the business, plans to keep a majority stake after the IPO.

SocGen said that selling its entire stake would improve its common equity Tier 1 ratio by at least 20 basis points.