Too big an idea 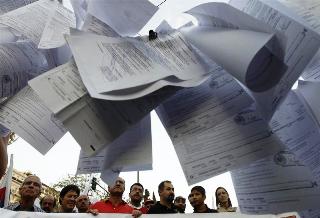 The theory is grand, but the practice may be meagre. That is a fair summary of one of the hot ideas wandering around Europe. Fiscal devaluation is the name economists give to reforms which move taxes from employers to consumers. President Nicolas Sarkozy has promised a law to “lighten the burden on labour” in France. There the concept is known as “social VAT”, because part of the financing of the social safety net would shift from businesses to a VAT increase.

The response from the French public has been tepid, but some economists, especially those who wish to keep the euro zone together, are keen. They argue that decreasing domestic producers’ labour costs will makes their products more attractive to both foreign and domestic buyers. The result is smaller national trade deficits and a more balanced regional economy. France, along with Greece and Portugal, could reap the benefits of currency devaluation without any cuts in nominal wages.

The logic holds, as long as only deficit countries change their taxes around. But the French are talking about reducing labour costs by less than 5 percent, while most economists think double-digit reductions are needed to boost exports significantly in industrial economies. And workers will want to keep up with the inflation induced by a higher VAT rate. Wage increases would then slice into the French employers’ gains.

Still, a labour-to-consumption tax shift could help address one the enduring problems of highly productive economies: inadequate job creation. Far too many people who could work for pay are classified as unemployed, disabled or retired. A large labour tax wedge – the money that employers pay, but employees only receive indirectly in the form of welfare state benefits – gives the wrong incentive.

In Europe and the United States, the tax burden should fall predominantly on relatively ample consumption goods and services and hardly at all on relatively scarce job-creators. It is possible and desirable to move taxes in the right direction. But as Sarkozy never seems to learn, the losers from tax changes make more noise than the winners. Barring a revolution – or a revolutionary increase in politicians’ willpower – a truly social VAT is likely to remain more a slogan than a policy.

Bills for a new one-off income tax are placed in front of the protesters from the Greek Communist-affiliated trade union PAME during a rally against government's new austerity measures in Athens, September 28, 2011. EU and IMF inspectors will return to Greece on Thursday to decide whether Athens has done enough to secure a new batch of aid vital to avoid bankruptcy, while Germany suggested a new bailout may have to be renegotiated.

The French government is planning to increase the rate of Value Added Tax and reduce the social welfare contributions of companies. A law to introduce this combination, which the government calls a “social VAT” will be proposed before the presidential elections in March, budget minister Valerie Pecresse said on Jan. 2.
In 2007, the VAT rate in Germany was increased from 16 percent to 19 percent. As the same time, tax cuts on employers reduced the proportion of gross wages not received by employees from 41.9 percent to 40.5 percent. The tax change was part of the Hartz reform, a collection of changes in the German labour market implemented over several years.