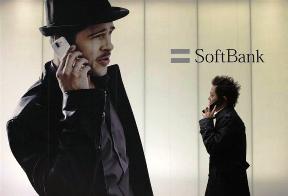 The $40 bln group may take control of $17 bln Sprint Nextel. Aside from pooling iPhone purchases, combining the No. 3 cellphone carriers in the U.S. and Japan has little industrial logic. It looks like another “get out of Japan” deal fueled by cheap money and docile shareholders.

A man using a mobile phone walks past an advertisement board of Softbank Corp in Tokyo. The outline of the sale of mobile phone operator Willcom to rival SoftBank has emerged with details being awaited. The sale for a basement bargain price will end the restructuring phase of Willcom, which filed for bankruptcy in February with debts of ¥206bn.

Softbank, Japan’s third-largest cellphone carrier, is in talks to buy a majority stake in U.S. number three operator Sprint Nextel for more than 1 trillion yen ($12.8 billion), Reuters reported on Oct. 11, citing a source with direct knowledge of the matter.

Sprint confirmed on Oct. 11 that it was in discussions with Softbank about “a potential substantial investment by Softbank in Sprint” which might result in a change of control, but said there could be no assurances that the discussions result in any transaction.