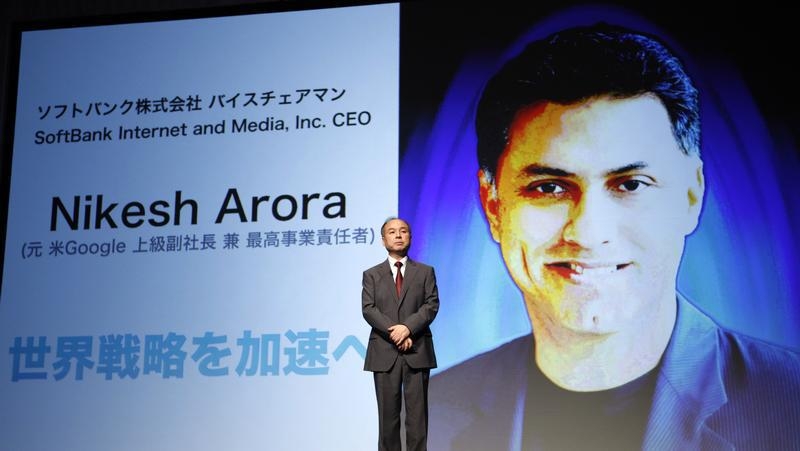 SoftBank’s hired gun is taking an unusually straightforward route to ownership. Recent recruit Nikesh Arora is investing 60 billion yen ($483 million) in the Japanese tech group’s shares. It’s a refreshing alternative to the stock-based pay schemes that are the norm for SoftBank’s Silicon Valley rivals. A strong show of confidence may also help the ex-Googler push through some of his more adventurous ideas.

Even for Arora, who spent a decade at Google and was the search giant’s highest-paid executive in 2012, the investment is – in his own words – “an enormous risk”. It’s almost four times the 16.6 billion yen the Japanese group paid him following his arrival last year, mostly as compensation for the restricted stock he left behind at Google.

Buying 0.7 percent of SoftBank will cement the president and chief operating officer’s position as the eventual successor to Masayoshi Son, who still owns 19 percent of the company he founded.

The big bet may also help win support from outside shareholders for some of SoftBank’s more recent corporate wagers. Arora’s arrival has coincided with a spending binge at the $72 billion group. In an attempt to repeat past successes such as its investment in Chinese e-commerce giant Alibaba, SoftBank has ploughed money into in taxi-hailing apps and online retailers, pumped $1 billion into South Korean e-commerce group Coupang, and unveiled a venture to spend $20 billion on solar energy in India.

Not many executives put their personal wealth at risk for a company they did not set up. Western corporations tend to lavish high-level recruits with options and restricted shares that only pay out if they perform. Though these schemes give employees an incentive to succeed, the downside of failure is usually small. By contrast, Arora will have equal motivation to prevent SoftBank shares from falling as he will to pump them up.

Nevertheless, confidence can be misplaced. Consider former Apple executive Ron Johnson, who spent $50 million on warrants exchangeable into J.C. Penney stock at the prevailing market price when he joined the retailer in 2011. Johnson was ousted after less than two years, and the shares have continued to languish. Managers who are owners have more at stake but they can still be wrong.

SoftBank said on Aug. 20 that Nikesh Arora, its president and chief operating officer, will invest 60 billion yen ($483 million) in the company’s stock.

Arora said the purchase, which will be carried out by program trade over the next six months, is a “personal bet” which would help to align his vision with that of Masayoshi Son, SoftBank’s founder and chief executive.

“This is a large transaction for me, and involves taking an enormous risk in my life once again,” he said in a statement.

Arora, who joined SoftBank from Google last year, was paid 16.6 billion yen ($138 million) in the year to March 2015, according to SoftBank’s annual report.

Google estimated that Arora held options and unvested stock in the U.S. web giant worth $107 million at the end of December 2013, according to regulatory filings.