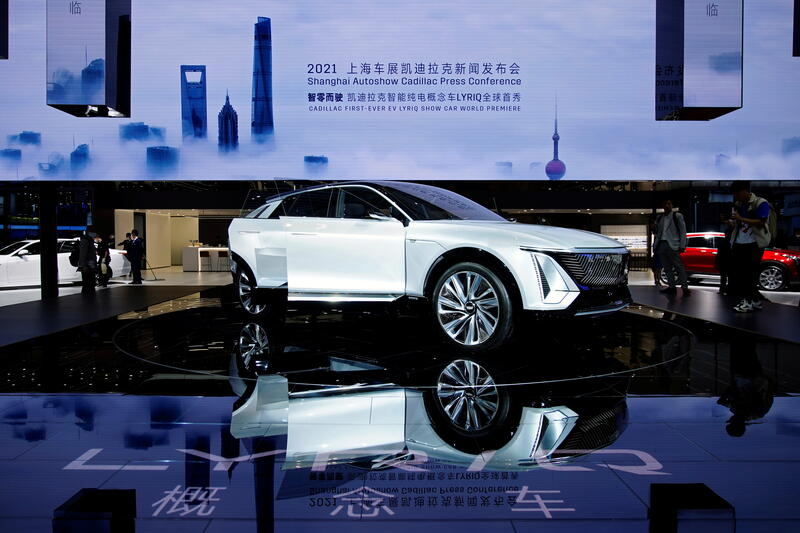 Supply-chain crunches, notably a shortage of chips, and the rising cost of raw materials and labor make it more expensive to produce a vehicle. GM’s cost of auto sales more than doubled in the second quarter to about $27 billion. In the last half of 2021, the world’s top automaker expects commodity costs will rise by up to $2 billion. Last week, Ford Motor said operating profit will likely be weaker in that same period for similar reasons. With chip shortages expected to extend into 2022, speeding sales will hit more inflation potholes. (By Gina Chon)

Who’s the Boss? New Hugo Boss Chief Executive Daniel Grieder’s ambitions look lofty. The former Tommy Hilfiger manager, at the helm of the German-listed brand since June, unveiled plans on Wednesday to double revenue to 4 billion euros by 2025. Meanwhile, operating margins, he hopes, will return to a pre-pandemic 12% of sales. Both require Olympic-style sprinting abilities. Hugo Boss, whose men’s suits sell at $700-plus, was hit hard by the health crisis, losing a third of revenue last year.

Even if the group recoups much of that lost ground this year, Grieder will have to ensure that revenue grows at a compound annual rate of 12% until 2025. That’s faster than the 11% annual projected average growth for top luxury goods brands such as Kering, LVMH, Moncler and Prada to 2023, according to Breakingviews calculations based on Refinitiv estimates. Much like Italian 100-metre gold medallist Lamont Marcell Jacobs, Hugo Boss will need to discover some unexpected pace. (By Lisa Jucca)

Hedging the cycle. The New York Times’ epic 2020 was always going to be hard to beat. The newspaper’s second-quarter results on Wednesday showed the slowest digital subscription growth in three years, with only 142,000 paying customers added. That’s a far cry from the record numbers who signed up last year thanks to U.S. President Donald Trump’s attempt to win a second term in the White House and Covid-19 coverage. Yet there was enough good news to drive shares up 10%.

Take advertising, normally a dismal affair for newspapers. Digital advertising jumped 80% from a year earlier while print ad revenue rose 40%. In total, the Times made $113 million from ad sales. True, 2020 was a low point when brands halted spending. But digital ad revenue was up more than a fifth compared with the second quarter of 2019. Courting Madison Avenue is helping the Times cope with the Trump slump. (By Jennifer Saba)

Non-synthetic problems. Zymergen, a synthetic biology company whose initial public offering in April gave it a market value of more than $3 billion, has hit the skids. The shares lost about 75% of their value on Wednesday, after the company unveiled a catalog of problems: Customers had trouble using its lead product, it had overestimated the size of the foldable screen market, and there would be little revenue until 2023 at the earliest. To top it all, the company jettisoned its chief executive.

Zymergen hopes to use genetic engineering to grow materials, instead of using traditional methods such as making them with fossil fuels. The promise is that using biomanufacturing will be cheaper and greener. It’s not alone, as larger Ginkgo Bioworks agreed to a SPAC deal that values it at $17.5 billion.

Underwriters including Goldman Sachs, JPMorgan, BofA Securities and others didn’t notice or mention the company’s product problems or overly optimistic projections. Sure, Zymergen says it recently became aware of these issues, but the IPO was only months ago. With technology SPAC deals offering even less quality control, investors are on their own. (By Robert Cyran)

Ready player one. Sony is doubling down on its content strategy. The Japanese conglomerate on Wednesday said operating profit for the quarter ending June rose 26% to 280 billion yen ($2.6 billion) and raised its forecast for the year ending March 2022.

The global semiconductor shortage has meant demand for its sought-after PlayStation 5 games console has exceeded supply. But that does not appear to have deterred boss Kenichiro Yoshida from stepping up elsewhere: Sony led 13 deals in the first half of 2021, compared to eight in all of 2020, according to Jefferies. It also signed distribution deals with Disney and Netflix, which is planning a foray into video games.

Finding new ways to monetise content is the way forward. Sony used to trade at a discount Nintendo which has long struggled to make use of its valuable intellectual property. That Sony now trades at 18 times forward earnings against Nintendo’s 15 times is testament to some of the progress Yoshida has made. (By Sharon Lam)

March of the robots. SoftBank may be hunting for tech treasure in pharma colossus Roche. The Japanese investor has amassed a $5 billion stake in the $342 billion Swiss drugmaker, according to Bloomberg. Its appeal lies in Roche’s increasing use of sophisticated data analysis to find drugs in its Genentech unit, Bloomberg says.

Using machine learning and other tools could help pharma companies find new drugs and strip out costs. Yet it’s a crowded sector, and still small: some 90 corporations including Roche, Pfizer and Alphabet subsidiary DeepMind shared some $473 million of revenue in 2019, according to Grand View Research. Big data could even be a threat to drugmakers. Clinical trials may become more sophisticated, allowing governments and healthcare providers to see the real value of drugs. Roche is currently valued on 18 times its forward earnings, versus peers that are on 14 times, according to Refinitiv. The Swiss group has many virtues, including a world leading cancer franchise, but value is not one of them. (By Aimee Donnellan)

Sour note. Del Monte Pacific has put the $900 million float of its Philippines business on ice as Manila fights a surge in coronavirus cases that has knocked about 7% off its stock market in the past month. The deal would have been the country’s second-largest initial public offering and proceeds would have helped pay down debt for the Singapore-listed group.

Del Monte is familiar with the effect of poor markets, having called off a spinoff attempt three years ago for similar reasons. This time however the market wobbles have a global taste: Last week produce giant Dole dropped 6% on its New York debut.

Dole’s deal, as with Del Monte’s, was only the latest twist in the endless slicing and dicing of the brands. Both have been traded, floated and taken private multiple times. Perhaps investors are souring more generally on a process where advisors pocketing fat fees are the only clear winners. (By Jennifer Hughes)

A Cadillac Lyriq electric vehicle (EV) under General Motors is seen during its world premiere on a media day for the Auto Shanghai show in Shanghai, China April 19, 2021.