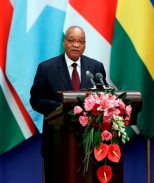 The poor have gained little in 18 years of democracy. The gulf with the rich is huge, growth isn’t what it could be, and newly wealthy leaders are complacent. It’s no surprise that as, say, in pre-1917 Russia, militant opposition is rising. The ruling ANC has its work cut out.

South African police shot at and killed 34 striking miners on Aug. 16. President Jacob Zuma visited the striking miners on Aug. 22. Julius Malema, the expelled youth leader of the African National Congress who has called for mine nationalization, was enthusiastically received by striking Lonmin miners at a rally on Aug. 18.
The country’s annual population growth is currently 1.5 percent, according to the World Bank.
South Africa ranks 64th on Transparency International’s corruption perceptions index, 70th on the Heritage Foundation’s index of economic freedom, and 35th on the World Bank’s ease of doing business index. Its Gini coefficient, a measure of income inequality, was 0.63 in 2009, according to the World Bank, among the world’s highest.