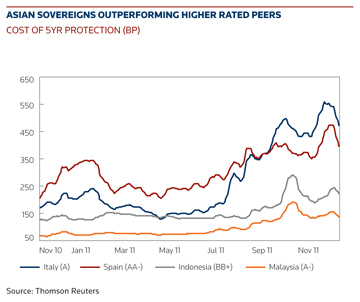 South-East Asia offers an enticing getaway in a stormy 2012. Growth will slow along with the global economy, but Asia’s emerging economies should still outpace developed neighbours. That’s likely to cool stocks, but as interest rates fall to offset slower growth, government bonds should benefit. The biggest risk is that retreating European and other foreign funds tug currencies down and push bond yields higher. But the risks look balanced. Malaysia, the Philippines and Thailand stand out as the region’s safest harbours.

Even a slowing developing Asia should still manage 6.6 percent growth in 2012, according to Nomura. Economies most reliant on exports, particularly of electronics, will be hit hardest, like Singapore, Taiwan and Malaysia. But these and other developing Asian governments have finances Europe can only envy – even Malaysia and the Philippines have less debt relative to GDP than either Germany or France. That means they can afford to spend and cut interest rates, which should lure more local investors into their bonds.

Foreign investors drove Asian bonds in 2011 by using cheap dollars to snap them up in the first half, then selling as the United States tightened its monetary policy and Europe’s troubles mounted. Emerging Asia is particularly susceptible to ebbing foreign capital because it still relies on external credit, particularly for short-term working capital and trade finance. And roughly three-fifths of the offshore borrowing in Southeast Asia comes from European banks. The biggest risk to Asian bonds, therefore, is that more of this capital drains as euro zone banks pull back.

Not all would be equally exposed, though. Malaysia and Thailand have sizeable current account surpluses and foreign exchange reserves that buffer their currencies. And both Thailand and the Philippines have relatively low exposure to short-term foreign credit. Investors in Philippine bonds earned a 12 percent return in 2011, yet the bonds still pay a higher yield than most regional peers – about 5.7 percent for 10-year bonds. And though they yield less, Malaysia and Thailand rely heavily on exports, meaning their interest rates are likely to fall and drive their bonds up. If 2012 gets tough, smart investors will head to the beach.

The Asian Development Bank said in its semi-annual outlook on Dec. 6 that sovereign debt problems in Europe and an anaemic recovery in the U.S. would weaken Asia’s economic growth in 2012. The bank cut its forecast for the region’s growth next year to 7.2 percent from 7.5 percent in its September outlook.
The euro zone’s manufacturing sector contracted at its fastest pace in two years in November, according to a survey released Dec. 1 by Markit Economics. Its euro zone Manufacturing Purchasing Managers’ Index (PMI) fell to 46.4, the lowest level since July 2009. China’s economy also appeared to be slowing by a similar amount. Its official measure of PMI shrank in November for the first time in almost three years.
Thanks to increased output in the United States and Russia, the JPMorgan Global All-Industry Output Index rose slightly in November to 52 from 51.3, indicating a weak expansion. A level of 50 represents no change.