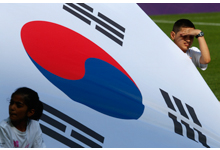 Japan’s weak yen policy could be South Korea’s biggest economic enemy this year. The strengthening won, which has risen 23 percent against the yen in the past six months, was partly to blame for the country’s anaemic GDP growth in the fourth quarter. It’s also putting the squeeze on manufacturers like Hyundai. Lower interest rates could help to ease the pressure.

An appreciating currency is a big dilemma for South Korea’s central bank. Investors are betting the Bank of Korea’s policy interest rate of 2.75 percent, which it last reduced in October, will remain unchanged as the incoming government of President Park Geun-hye boosts public spending in an attempt to revive growth.

But the wait-and-watch approach is risky because it could engender expectations that the central bank is not particularly worried about the country’s exports losing some of their price competitiveness.

With the likes of Hyundai and Samsung competing directly against Japan’s Honda and Sony, a cheaper yen will undermine the profitability of Korean exporters. The surprise 6 percent drop in Hyundai Motor Co’s net profit in the final quarter of 2012 underscores the risk. And now that the Bank of Japan has agreed to support Prime Minister Shinzo Abe’s plan by printing 13 trillion yen ($145 billion) in new money every month starting in January 2014, the yen could weaken further.

A recovery in Chinese demand would relieve some of the pressure on Korean exporters. But gauging the strength of China’s revival will require the Bank of Korea to keep rates on hold for at least a few more months. That could be risky, considering the Abe administration will probably appoint a more aggressive money-printer as the BOJ’s next governor in April.

The authorities could slow the won’s rise by intervening in the currency market, but it makes sense for the Bank of Korea to buy some additional insurance now. With inflation slowing to just 1.4 percent in December, much lower than the central bank’s target range of 2.5 percent to 3.5 percent, the monetary authority certainly has the scope to reduce interest rates. The Bank of Korea should grab the lacklustre GDP figures as an opportunity to give the economy another monetary boost.

A boy shields his eyes as he carries the South Korea flag before their men's football first round, Group B match against Gabon at Wembley Stadium during the London 2012 Olympic Games

South Korea’s economy grew a weaker-than-expected 1.5 percent from a year earlier in the fourth quarter of 2012, matching its rate of expansion in the previous three months.
Hyundai Motor Co. reported earnings of 1.89 trillion won ($1.77 billion) for the final quarter of 2012, down 6 percent from the same period a year earlier. The surprise drop, the company’s first since it changed accounting rules in 2011, was partly because of a stronger won, which crimped the Korean auto maker’s profitability.