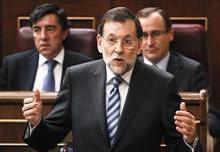 Avoiding the great Greek scare hasn’t allowed the euro zone to breathe a sigh of relief on Spain. Yields on the country’s 10-year bonds are now reaching 7.2 percent. The Spanish government has already done a lot. The extra steps it could take are of marginal importance in the current context.

Markets aren’t listening to Madrid. What matters is that the euro leaders come up with a credible road map to overhaul monetary union at their end-of-month summit.

It’s time to end the alphabet soup – plan A, plan B etc – and come up with a grand plan. The euro leaders’ collective fault is to have let markets even imagine that Spain could be bailed out – or even that it could possibly leave the euro. If they don’t want either to happen, they must act fast.

What is needed is a powerful message that the euro zone is integrating, not disintegrating. It may start with the launch of a fully-fledged banking union, as Mario Draghi and French President François Hollande advocate. It will not happen overnight. Angela Merkel doesn’t think it is possible without a fiscal and even a political union: this should be a good incentive for the French president to accept the type of sovereignty transfers that France has historically refused – even if the price is that some structural reforms might be forced on his government.

The second challenge euro zone leaders must tackle is the consequence of austerity on the region’s economy. Greece, Ireland, Portugal and Spain are bleeding. No one advocates that their governments should stop cleaning up their budgets. But indiscriminate spending cuts hurt demand, and income tax hikes hurt competitiveness. More time will be needed to reach the fiscal targets agreed. There is no avoiding that basic fact. And the ECB may want to confirm its hints that it is ready to lower its key interest rates next month.

The summit may succeed or fail on the capacity of euro zone leaders to reassure Germany and give it guarantees that its money will not be wasted on irresponsible governments. Merkel discipline to alleviate market discipline is needed.

Yields on Spanish 10-year bonds were at 7.17 percent early on June 19, with yields on Italian bonds of the same maturity at 6.01 percent.

Spanish Prime Minister Mariano Rajoy speaks during a session at Spanish parliament in Madrid June 13, 2012. Madrid insisted it would stick to its borrowing plans this year after the European Union agreed to the bailout of up to €100bn (US$125bn). REUTERS/Andrea Comas

Yields on Spanish 10-year bonds were at 7.17 percent early on June 19, with yields on Italian bonds of the same maturity at 6.01 percent.