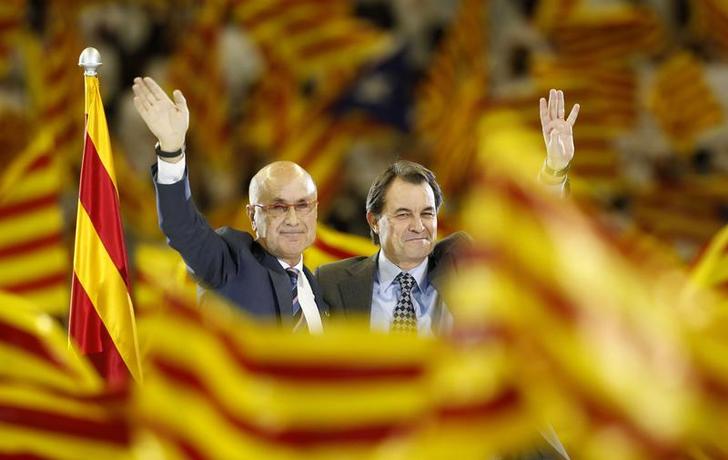 The Spanish central bank governor has warned of a bank deposit freeze if the region votes to break away. Yet Catalan banks could access ECB funding by redomiciling to Madrid. That would create political and practical headaches – but capital controls aren’t one of them.

Artur Mas (R), leader of Convergencia i Unio (CIU) and candidate for the upcoming elections in Catalonia waves with party co-leader Josep Antoni Duran i Lleida during a meeting in Barcelona, November 26, 2010.

Spain’s Catalonia region will be automatically shut out of the euro zone and its banks would lose access to European Central Bank facilities if it becomes independent from the rest of the country, the Spanish central bank governor said on Sept. 21.

Asked what the probability of a freeze on bank deposits was if Catalonia declared itself independent, Luis Maria Linde said this was a highly unlikely event although there was a risk.

“It’s clear that if there are serious tensions there could be a freeze on deposits as has been seen in Latin America and in Greece. In that respect it’s a possibility, a risk,” he said.

On Sept. 18, the Spanish banking association warned that banks would have to reconsider their presence in the region if it were to break away unilaterally from the rest of Spain. “These difficulties would force banks to reconsider their strategy of establishment, with the corresponding risk of a reduction in services, and along with that, financial exclusion, a rise in the cost of credit and reduced lending.”