It ain’t over till it’s over 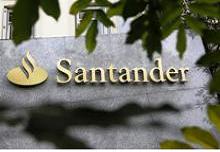 Two independent consultancies have identified a capital hole of up to 62 bln euros. That’s at the lower end of market fears. And though the hurdle looks low, the stress test assumptions are harsh. But the results are not final. The actual bill won’t become clear until September.

The logo of Spanish bank Santander is seen outside a building in Madrid October 27, 2011. (REUTERS/Andrea Comas)

Two independent auditors said on June 21 that Spanish lenders could need between 16 and 62 billion euros in fresh capital. The results came ahead of Spain’s formal request for up to a 100 billion euro bailout for its banks.
Oliver Wyman and Roland Berger conducted two tests - a base case and an adverse case - on 14 lenders, which account for 90 percent of Spain’s financial system. The adverse scenario stress tests assumed cumulative GDP contraction of 6.5 percent from 2012 to 2014, a total fall in house prices of 55-60 percent from the peak, and fall in land prices of 85 to 90 percent. Banks would face losses of between 250 and 270 billion euros, according to Oliver Wyman.
The tests measured the amount of capital needed assuming lenders retain a minimum Core Tier 1 target of six percent in the case of the adverse test, and nine percent in the base case.
The Bank of Spain said Spain’s three largest lenders - Santander, BBVA and CaixaBank - would not need fresh funds. Fernando Restoy, deputy Governor of the Bank of Spain, said the bulk of the needs would go to the groups that have already received capital from Spain’s bailout fund, the FROB.
Restoy said bottom-up, bank-by-bank capital requirements will be released in September. Banks would then have 15 days to present a plan, and another 9 months to come up with the capital.