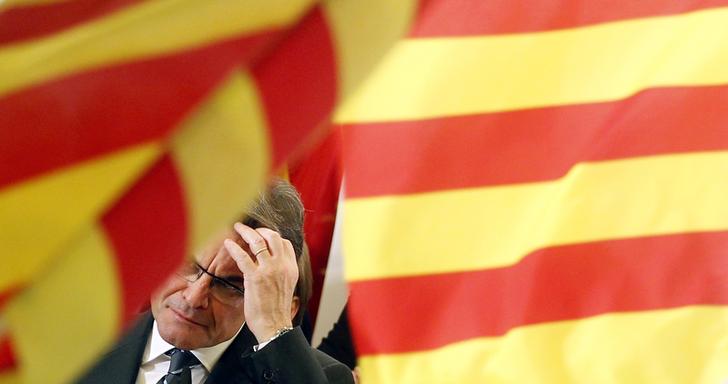 Investors in Spanish debt don’t seem to worry much about the tension in Catalonia. Independence is a distant possibility, and yields on the country’s 10-year bonds, at 2.7 percent, are now below the UK’s. But the insouciance of the Spanish government on the matter is harder to fathom. The crisis won’t simply go away if Madrid does nothing.

The Catalonian question is reduced for the moment to a sterile debate over whether or not the province has a right to hold a referendum on independence. The Madrid government says a vote slated for November is unconstitutional. It is also worried that the Basques could follow. The Catalan government, meanwhile, says it will go ahead with some sort of popular consultation anyway, while remaining within the legality.

The independentist sentiment will spike in September on Catalan national day, just a week before the Scottish referendum. But so far there has been no real public discussion on the merits or drawbacks of independence. Catalonia’s complaint that it is being fleeced by the central government has not been met with any serious rebuttal by Madrid. The region’s inhabitants pay more in tax because they earn more, but they say they are being short-changed when it comes to spending and public investment. The government will soon publish detailed regional fiscal accounts, but this is unlikely to end the argument.

Prime Minister Rajoy’s nonchalance exacerbates the Catalans’s feeling that they never get what they want, fuelling the nationalist flame. Symbolism matters. Rajoy says he is open to some constitutional reform, but he isn’t going to take the initiative. Yet he should. The government could start by forming a broad committee charged with redesigning devolution to the regions.

This would be risky, complex and time-consuming. Would reform include the question of the monarchy and electoral system? Any further devolution would have to ensure that Spain’s own tricky fiscal balance isn’t thrown off kilter. Catalonia produces nearly 20 percent of Spanish GDP and already exerts substantial powers. It must be much more specific about what sort of reform would make it agree to remain in Spain – and abandon the idea of a referendum, at least for now.

Rajoy may yet come up with a different olive branch. But doing nothing is a strange way to address the Catalonian risk.

Catalan President Artur Mas said he would forge ahead with plans for a Nov. 9 vote on independence. In an interview with Reuters on June 4, Mas said he would seek a legal formula for a non-binding vote, even though Prime Minister Mariano Rajoy has taken the position that any format would be illegal.

Catalonia said it had a fiscal deficit with the rest of Spain of 11 to 15 billion euros in 2011, or 5.7 to 7.7 percent of GDP, according to the Catalan finance minister.

Rajoy said on May 31 he doesn’t oppose constitutional reform, pointing out that it has already been changed twice. But he would not take the initiative and said he would need to know first what the reform would achieve.